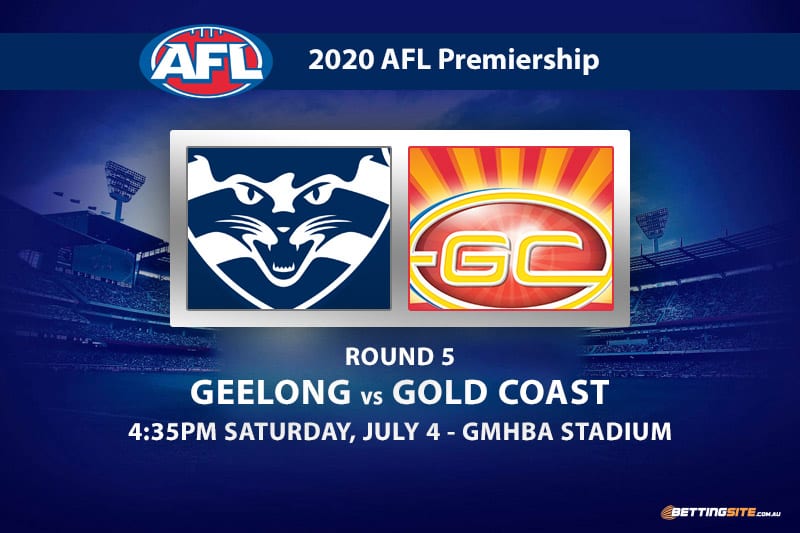 Can the Gold Coast Suns make it three wins on the trot when they travel to GMHBA Stadium this weekend to tackle the Geelong Cats?

Three weeks ago, we would never have thought the Suns had any chance, but their blistering form has turned this into one of the must-watch matches of the round.

Normally, the Cats win all their games at GMHBA Stadium against outsiders, but Carlton’s win in round three showed that Fortress Kardinia can be conquered.

The two 2018 clashes between these squads were won by a combined 180 points in favour of Geelong, but the most recent match was only a 27-point victory to the Cats.

This is a good opportunity for the second-placed Suns to make a statement and prove they are worthy of their place in the top four.

This is Gold Coast’s first away game of the year, so it will be interesting to see how the trip south affects a young squad that has dominated at Metricon Stadium since the restart.

Mitch Duncan is playing better footy than most of his teammates at this point in time. Even so, the West Australian midfielder often goes unnoticed while Patrick Dangerfield and Joel Selwood grab the headlines. He had 27 touches and kicked three goals in his last match against the Suns, and we think he can put similar numbers this week.

With 30 AFL Coaches Award votes in his past three matches, Matt Rowell may well be leading the Brownlow Medal count after four rounds. Some are saying the no.1 draft pick is the best first-year player in AFL history, but he needs to be extra creative this week against the powerful Geelong midfield. We think Rowell stands up to the task as he faces his childhood hero, Joel Selwood.

There are two main factors that lead us to pick Gryan Miers for this match. First, he is the joint-leading goalscorer at Geelong with five majors this season; and second, small forwards give the Suns more trouble than talls. Of Fremantle’s eight goals last round, seven were kicked by crumbing forwards, so Miers could cause Gold Coast a few issues with his footy smarts and goal sense.

Having kicked five goals and three behinds in the past two matches, Ben King is starting to flourish as the deepest forward for the Suns. Harry Taylor may come back into the Geelong squad after his week of rest, but the veteran defender may struggle to cope with King’s extension in the air and surprising skills at ground level.

A cold, rainy day is expected down in Geelong, so we can rule out a shootout. Both sides have some big-bodied midfielders that can will the ball forward, but there won’t be much clean scoring. The line of 125 points is big enough in dry conditions in 2020, let alone in the cold and wet on the narrow oval at Kardinia Park.

The aforementioned weather conditions should keep the margin down and give Gold Coast a chance to cover the line of 15.5 points. The Suns have been very impressive since footy restarted, so the Cats could even lose this one if they’re not careful.