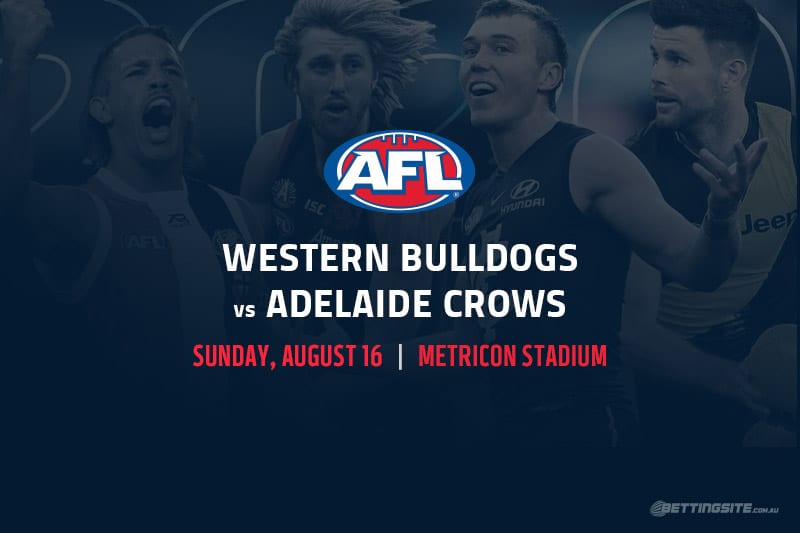 Sunday’s three AFL games will kick off at Metricon Stadium when the Western Bulldogs take on the Adelaide Crows, who are still looking for their first win this season.

Matthew Nicks’ Crows were on top of Collingwood in the first half last week but dropped off heavily after the main break to go down by 24 points.

As if Adelaide wasn’t in massive trouble already, stand-in skipper Tom Doedee and veteran flanker Tom Lynch will both sit out round 12 with hamstring injuries.

Zaine Cordy has been very trustworthy for the Bulldogs in defence, but he injured his chest at training and could miss up to four weeks.

On a brighter note for Adelaide, club captain Rory Sloane is fit to play following a hand injury that has kept him off the park since round six.

The Crows have won two of their last three battles with Luke Beveridge’s Bulldogs, but it would take a huge effort from the bottom side to end its winless run.

The Western Bulldogs trialled Marcus Bontempelli as a forward while Aaron Naughton was injured, but he struggled to make an impact in that role. Moving back into the midfield last round, the Bont had one of his best games of the year with 30 touches and a goal. Since Bontempelli also recorded 33 in his last contest against Adelaide, his confidence should be running high.

Matt Crouch had a day out against the Bulldogs last season, posting a career-high 47 disposals and kicking a goal. Although the Adelaide ball-magnet is yet to record 30 disposals in a game this year, he’s been knocking on the door with eight games in the upper 20s. Crouch seems to like the matchup against the Dogs, so we are backing him to have a big one this weekend.

Aaron Naughton was not at his best last week when he returned from an ankle injury, but Mitch Wallis has been fantastic for the Bulldogs this season. Having kicked a goal in nine of his 11 matches in 2020, including three hauls of three in his last five outings, Wallis has emerged as one of the most dangerous forwards in the competition and will take some stopping.

We saw glimpses of magic from Shane McAdam last week, including a great mark and a goal from a difficult set shot. The Crows have struggled more than every other team when it comes to kicking goals, but McAdam is a natural talent that can surprise opponents with his craft and athleticism. You won’t find better value for an Adelaide forward in this match.

The Crows have either been smashed in a high-scoring game or close in a low-scoring encounter. Although the Bulldogs are expected to dominate, we think Adelaide’s performance against Collingwood last week was a step in the right direction. The Doggies are hardly the most prolific goalscorers in the league, so we are leaning towards the unders for this one.

Since the Bulldogs were beaten last week and the Crows showed signs of improvement against the Magpies, we do not think this game will turn into a blowout. The Dogs will win comfortably in the end, but Adelaide will make a game of it with Rory Sloane back in the side.