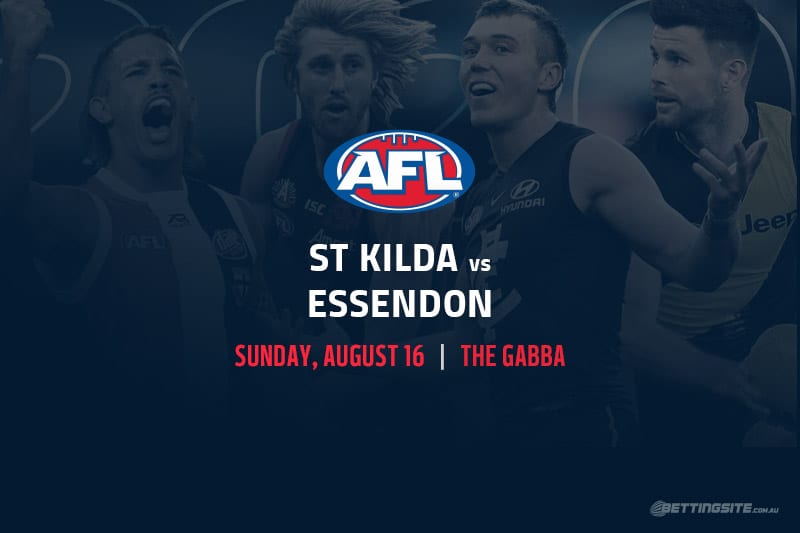 Two of the fastest teams in the AFL will go head-to-head at The Gabba this Sunday when the St Kilda Saints take on the Essendon Bombers.

Nothing can stop the Saints when their system is running smoothly and their crumbing forwards are playing well, but the same can be said about the Bombers and their rebounding play from half-back.

Essendon would do well to borrow a few moves from Geelong’s playbook, as the Cats took away St Kilda’s options coming out of the backline and negated the impact of the small forwards.

If Brett Ratten’s Saints want to win this week, they need to find a way for their smalls to make an impact even when they are being targeted.

St Kilda has lost Jade Gresham for the rest of the season with a stress fracture in his lower back, but Seb Ross is a chance to play and Zak Jones is ready to go.

The Bombers could have both Cale Hooker and Michael Hurley back in defence, while Jacob Townsend faces a test after copping a nasty concussion in the recent loss to the GWS Giants.

Both teams use speed and aggression to score, making this a very appealing matchup for fans of flashy footy.

Geelong murdered St Kilda in the midfield battle, as the Cats were first to the ball at most contests and simply wanted it more. Zak Jones is a see-ball-get-ball type of player that would have been disappointed with the decision to rest him for that clash. Since he will be the freshest midfielder for St Kilda, Jones looks a good option in the disposal markets.

There aren’t many midfielders hotter than Zach Merrett coming into this round, as the brilliant Bomber has surpassed 30 touches in three of his last four matches. Merrett also has a great track record against the Saints, averaging over 33 touches in his last three matches against them. With Andy McGrath and Dylan Shiel giving the Saints something to think about, the Essendon no.7 could get off the chain again this week.

Even if Michael Hurley and Cale Hooker both return this week for the Bombers, we think Max King is the man to look at in the first goalscorer betting. The tall forward has size and reach on the Essendon defenders, which makes him difficult to stop on a lead and in a contest. The 2020 Rising Star candidate struggled against Geelong last week and so will want to make an immediate impact in this one.

The pressure has been on Anthony McDonald-Tipungwuti of late, but we are backing the electric forward to find some form this weekend. He booted five goals against the Saints back in 2018, although this is a very different St Kilda side to the one he faced on that occasion. If he snags a confidence booster early, AMT could go on to kick a few.

Since both teams will likely have their foot on the accelerator at all times, this match could play more like a basketball game than a footy match. The ball should be pinging from end to end, which should give the forwards a chance to jump the defenders and kick plenty of goals.

If we take a read on their recent clashes with the Gold Coast Suns, St Kilda should edge out Essendon this weekend. In truth, it should be a more lopsided affair than those outcomes suggest. The Dons haven’t put four quarters together all season and lack direction at the moment, while the Saints will be keen to make up for the loss to Geelong and keep touch with the top four.