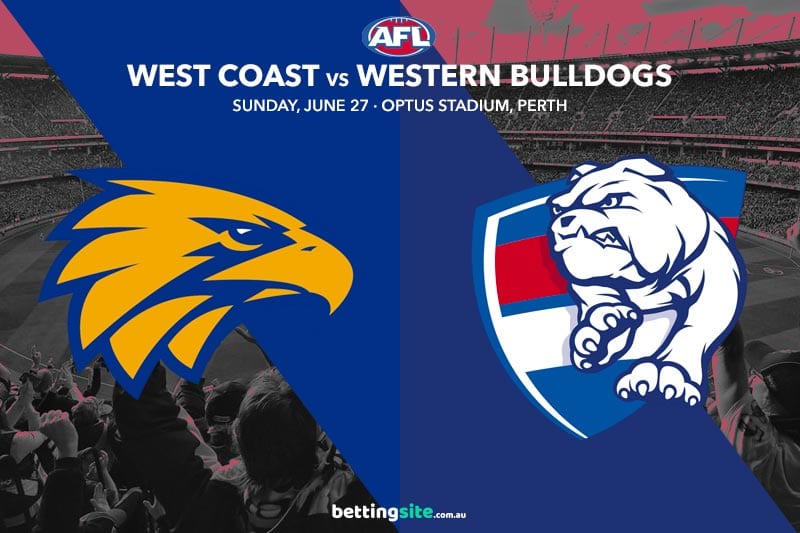 The West Coast Eagles will be out to settle a score when they host the Western Bulldogs at Optus Stadium this Sunday in round 15 of the 2021 AFL Premiership.

Adam Simpson’s Eagles were narrowly beaten by the Bulldogs back in round two earlier this season, but this time the match will be played in Perth, where the Eagles boast a strong record.

Marcus Bontempelli has been enormous for the Doggies this season, captaining them to 10 wins in the first 14 rounds. Despite sitting second on the AFL ladder, the Dogs have lost two of their last three games and desperately need a win this week to stay in touch with the first-placed Demons.

Four of the best players on the Eagles’ list will return this week, as Luke Shuey, Tim Kelly, Jeremy McGovern and Brad Sheppard have all passed the appropriate fitness tests.

The Bulldogs have named Josh Schache as a possible inclusion for Aaron Naughton, who was subbed out in round 14 with sore ribs, although the latter has been named to play.

When these sides clashed back in round two at Marvel Stadium, the Bulldogs’ midfield was at the peak of its powers. Seven Doggies players ticked off over 25 disposals as they clinched a seven-point win at Marvel Stadium. Expect the usual suspects to rack up plenty of the footy again this weekend, but keep a close eye on Caleb Daniel at half-back too.

The return of Luke Shuey and Tim Kelly should see the Eagles win more clearances out of the centre, especially with Elliot Yeo set to play his fourth game of the season. The midfield battle could determine the match, and we think Nic Naitanui will be licking his lips now that Shuey is back.

The key forwards will take centre stage at Optus Stadium. Josh Kennedy has kicked 11 goals across his last four contests with the Bulldogs, while Josh Bruce is currently equal-second in the Coleman Medal race with 37 goals. The ex-Saint kicked three goals against the Eagles earlier in the season and could carry the load this week if Aaron Naughton doesn’t play.

West Coast to win by 25+ points

The Eagles won a premiership in 2018 with a very similar team to what they will roll out this Sunday. The Bulldogs have been terrific all season, but it is hard to see the Eagles losing with Luke Shuey, Elliot Yeo, Tim Kelly, Andrew Gaff and Dom Sheed all playing together. Josh Kennedy, Jack Darling and Oscar Allen could tear apart the undersized Bulldogs backline.

After a game-winning four goals against Richmond in round 13, Josh Kennedy looks back to his best. The 33-year-old has kicked 28 majors so far in 2021 and does not look like slowing down – certainly not this week. Kennedy has kicked three or more goals in four of his last six games and should continue that form this Sunday.

Josh Kennedy and the elite Eagles midfield will drown out the Bulldogs on their home deck this weekend. We expect Caleb Daniel to get up the ground and collect over 25 disposals, which he has done eight times this year.