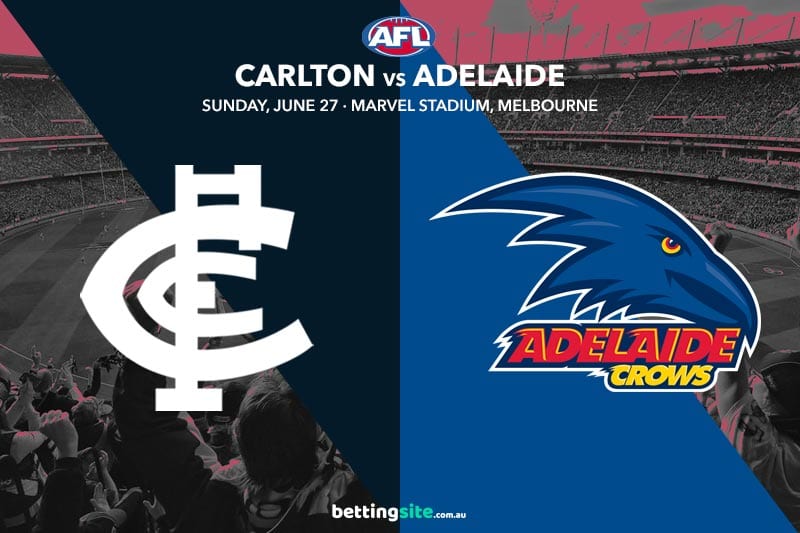 The Carlton Blues desperately need a win this Sunday when they host the Adelaide Crows at Marvel Stadium to finish off round 15 of the 2021 AFL season.

The heat is on David Teague this week after a horrible month from his Blues. Zac Fisher, Marc Pittonet and Luke Parks are confirmed outs for Carlton this week, but the inclusions are yet to be finalised. Lachie Plowman should come in for Parks, while Josh Honey could create a buzz up forward in place of Fisher.

Josh Worrell was happy to earn his debut in round 13 for the Crows, but he did not do enough to keep his spot in the side. Experienced defender Luke Brown should make his return for Adelaide after missing the last two matches.

The Crows have had the wood over the Blues in recent times, winning six of the last seven clashes. Even last year when the Crows were struggling under Matthew Nicks in his first season as coach, the Blues could not knock them off.

Taylor Walker started the 2021 season on fire, but the younger key forwards have been putting on a show recently. Riley Thilthorpe and Darcy Fogarty have combined for 20 goals since round eight, forcing most teams to play a tall backline. We think Fogarty is going to have a good day in front of the goals, as Jacob Weitering and Liam Jones will be busy guarding the taller Walker and Thilthorpe.

Sam Docherty and Rory Laird are best known as high-class rebounding defenders, but both have spent more time up the ground this season. Docherty is averaging just under 25 disposals per game this season, while Laird is averaging over 30 touches for the Crows since moving to the middle.

Docherty picked up 30 disposals in his last full-length contest against Adelaide, which followed the 27 touches he had against them the year before. Knowing Docherty will spend more time up the ground and has a good record against the Crows, he will be a very good option in the 25+ disposal market.

We think the Crows have the capacity to upset the Blues in this match, so we will be taking them at the line this Sunday afternoon. The improvement of Ben Keays and Rory Laird in the midfield this season has turned Adelaide into a much stronger side very quickly. The Crows were good enough to beat the Saints in round 13, and we think they will come close at Marvel Stadium.

Although Darcy Fogarty has not kicked any goals against the Blues in the past, the inclusion of Riley Thilthorpe should see him manned up against a smaller defender. Fogarty is a beautiful set shot at goal, and he should be supplied with plenty of chances this weekend.

Round 15 will conclude with a tight game at Marvel Stadium, where Darcy Fogarty will kick a pair of goals and Sam Docherty will be at his hard-running best. You can combine these three legs to net yourself $10 with Sportsbet.com.au.