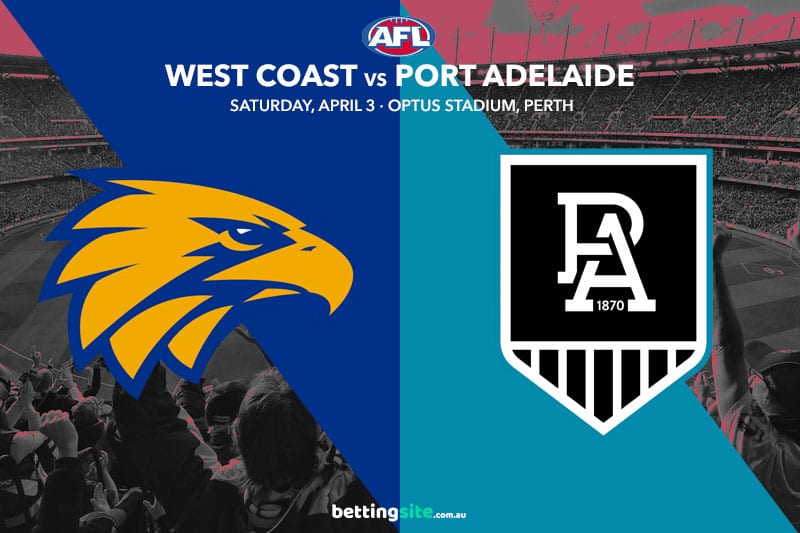 The West Coast Eagles will host Port Adelaide at Optus Stadium this Saturday in what could be the highlight of the AFL fixture for round three.

Online bookmakers and many pundits view these clubs as potential grand finalists, and both teams are making the right noises at the start of the season.

The Eagles went down to the Bulldogs last week in a seven-point belter, while the Power looked clinical against a weaker Essendon outfit.

Both clubs should welcome back important players; Eagles captain Luke Shuey is expected to pass fit after missing the start of the year with hamstring trouble, while rising star Connor Rozee looks good to go for Port.

You cannot separate these clubs inside 50, as they both have talented forward lines and strong defensive units, but the midfield will be an interesting contest. Nic Naitanui is head and shoulders above Scott Lycett and Peter Ladhams as a standalone ruckman, but the Port pair could wear down the two-time All Australian over four quarters. Whoever wins this battle may well win the match.

The Eagles have kicked 26 goals in their first two games this season, which puts them third in the ranking behind the Sydney Swans and Port Adelaide. All three of West Coast’s key forwards have had a big impact already this season, as Josh Kennedy, Oscar Allen and Jack Darling have combined for 17 goals. High scoring has been the trend thus far in 2021 for West Coast, so keep that in mind when look at the over/under markets at AFL betting sites.

The Power have started off quickly and then held their leads in their two outings so far, scoring more total points in the first half on both occasions. The potent forward-line of Charlie Dixon, Mitch Georgiades and Orazio Fantasia worked brilliantly last week, combining for 10 majors, and that mix should remain unchanged for this Saturday.

Josh Kennedy was the shining light when the Eagles were swamped by the Power last season, kicking all four of the team’s goals that day. Kennedy has started his season with six goals in two games, and we think he should keep his average going with another three majors.

Even though they will be on enemy territory, the Power have got our tip here. Ken Hinkley has put together a midfield group that provides excellent opportunities for his forwards, who have been taking their chances more often than not. While they haven’t beaten much yet, we think the Power will keep their streak alive in a close contest.

Ollie Wines and Travis Boak both look to be razor-sharp for Port, while Zak Butters had a breakout performance last week with 36 disposals and a goal. Mitch Georgiades was the late inclusion last week and kicked four majors, so he should be a walk-up start this Saturday night.