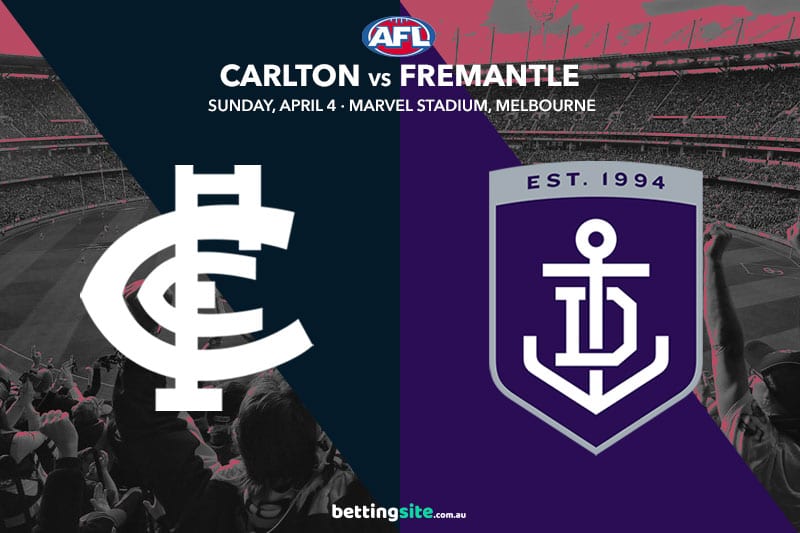 Carlton is searching for its first win of the 2021 AFL season as it hosts the in-form Fremantle at Marvel Stadium on Sunday.

Last year’s clash was nothing short of amazing, as a last-minute free kick to Sam Docherty led to an after-the-siren set shot for Jack Newnes, who slotted a brilliant goal and won Carlton the match.

Justin Longmuir will seek revenge this Sunday as his team goes for their second straight victory, as they secured a big win against the Giants last weekend.

Dual Brownlow Medallist Nat Fyfe will miss this clash with concussion, while Jack Martin and Zac Fisher will miss Carlton’s next six matches, after suffering injuries in their crushing loss to Collingwood.

One of the best young key defenders in the league will be given the tough task of defending Matt Taberner this Sunday, but Jacob Weitering should make it a close contest. Taberner has slotted five goals thus far in 2021, while Weitering only conceded one goal against Richmond spearhead Tom Lynch in round one, but was less effective against Mason Cox the week after.

No team has conceded as many inside 50s to the opposition as the Blues, who desperately need to fix that aspect of their game. The Blue Baggers are giving their opponents too many chances to score, which is why they have conceded over 100 points in both opening matches. You can expect the match to be high scoring if Carlton continues the early-season trend.

Boasting one of the best young midfields in the AFL, Andrew Brayshaw, Adam Cerra and Caleb Serong have been exceptional this year, despite only entering their fourth and second seasons, while veteran David Mundy wound back the clock last week with 35 touches. You can look to parlay the Fremantle midfielders into your multi, as online bookmakers offer great odds in the disposal markets.

Here are our free tips for the Carlton v Fremantle clash being played at Marvel on Sunday.

Matt Taberner to kick 3+ goals
In terms of contested marking, Matt Taberner is one of the best aerialists in the AFL. If the Blues are going to allow multiple inside 50s throughout the day, the key Docker should get his hands to plenty of kicks, where he should pluck a few marks and convert his goals. Taberner kicked three of Fremantle’s four goals in last year’s clash.

Fremantle Dockers +15.5
After watching the Dockers tear the GWS Giants apart last weekend, it was evident they are a strong side, and we expect them to put up a huge fight against the Blues. Even without Nat Fyfe, who played exclusively as a forward before sustaining his concussion, the Dockers have plenty of firepower, which will only be boosted by the return of 2019 All Australian Michael Walters.

With Zac Fisher and Jack Martin ruled out, the Blues will have less potency in their forward half, while their captain Patrick Cripps has admitted to playing through general soreness already this season. We think the Dockers should hold the line and possibly knock of Carlton at Marvel Stadium this Sunday.