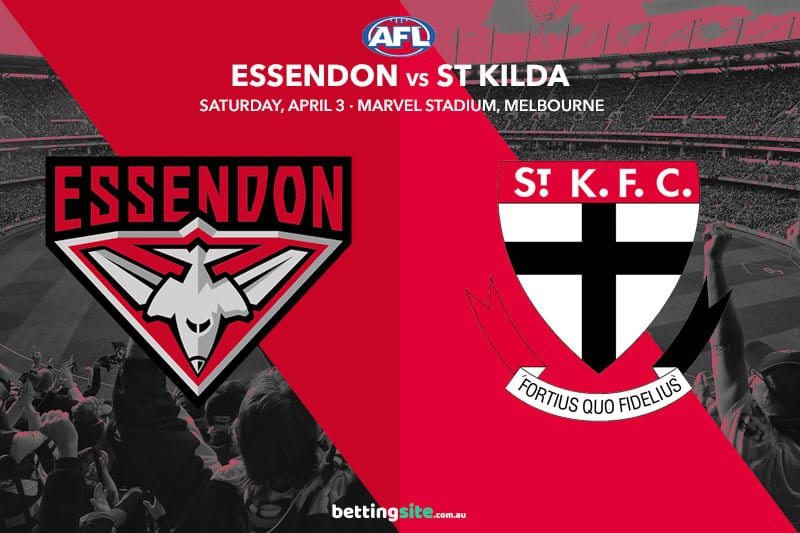 Can the injury-riddled Essendon Bombers get their first win of the 2021 AFL Premiership season this Saturday, or will the St Kilda Saints be too strong on their home deck at Marvel Stadium?

The Bombers copped three massive injuries during their big loss to Port Adelaide, as Sam Draper (ankle), Jye Caldwell (hamstring) and Dylan Shiel (knee) will all sit out at least the next four weeks.

The Saints struggled with poor kicking in their 18-point loss to the Demons in round two, but that area of their game should improve as Brad Crouch plays his first game for the club.

It is not all doom and gloom for the Bombers this week; Jake Stringer should join the side after two strong VFL hitouts, while prized no.9 draft pick Archie Perkins is expected to make his senior debut.

Ben Paton has kept Anthony McDonald-Tipungwuti to just one goal in St Kilda’s last two meetings with Essendon, but the 22-year-old defender is out this season with a broken leg. Tippa kicked five goals against the Saints back in 2018, and considering he has already kicked five in his first two games this season, he could be Essendon’s key to winning this match. We think the sometimes-reckless Ben Long will be given the task this week, so you can expect McDonald-Tipungwuti to lure him in for a few cheeky free kicks inside 50.

With Jye Caldwell and Dylan Shiel both ruled out with long-term injuries, the Dons will be forced to use other players in the midfield. Hard runners like Nick Hind or Devon Smith could be given a role in the middle, making them excellent choices for disposal markets at online bookmakers. The Bombers have not scored well against the Saints in their past two meetings, so a low-scoring game could be on the cards.

Their quick midfielders have looked dangerous this season, but the Saints have not scored more than 90 points in a game yet. The last few matches against the Dons have been low scoring, but with the Bombers’ vast list of injuries, it is hard to see the Saints failing to put up a big score here. Max King kicked three in this meeting last season and could easily do it again since Michael Hurley is sidelined.

Nick Hind to get 25+ disposals

This will be Nick Hind’s first match against the team he was drafted to in 2018, as the former Saint made the switch to Windy Hill during the offseason. Hind collected 25 disposals off half-back in round one, and we think the elite runner could get up the ground and find plenty of ball in the absence of Dylan Shiel.

The loss last week to the Demons was hard to watch for Saints fans, as their best ball-users by foot were horrific, but those skills should be cleaned up here against the Bombers. Paul Hunter will not be exposed this week since the Dons will also be without their first-choice ruckman, while Brad Crouch will make a huge difference for this St Kilda side.

Another low-scoring match is on the cards this week, but we still see Max King slotting his fair share of goals. The Saints have too many stars in the midfield to lose to this undermanned Essendon outfit.