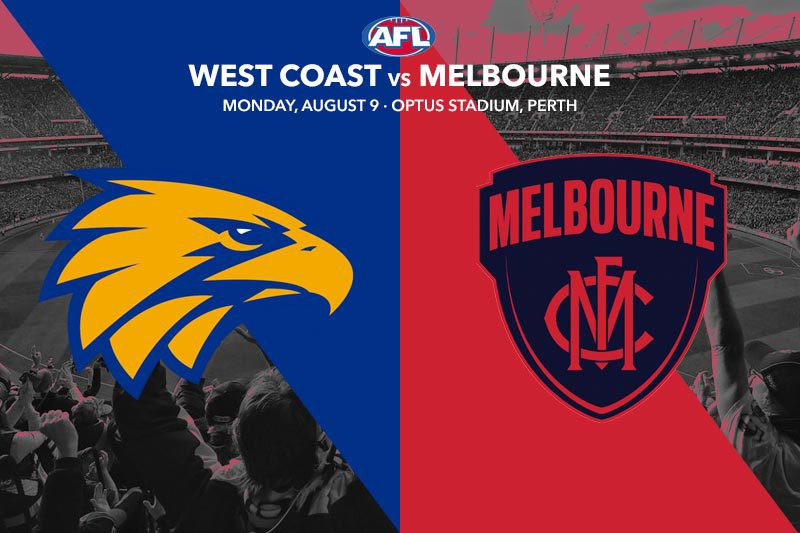 Monday night football returns to the AFL fixture in round 21 when the West Coast Eagles host the Melbourne Demons at Optus Stadium.

The contrast between West Coast and Melbourne was stark in round 20; the Eagles played one of their worst games of the year in a 45-point loss to the Magpies, while the Demons demolished the Suns by 98 points.

Jack Viney will miss the next two weeks after being suspended for serious misconduct, but the Demons have capable reinforcements to replace their skipper in James Jordon or Aaron vandenBerg.

The Eagles were hopeful one of Luke Shuey (calf), Liam Ryan (hamstring) or Tom Barrass (hamstring) would return this week, but none of those three premiership players have been given the green light.

Adam Simpson’s men were insipid defensively against the Magpies, allowing them to run freely around the MCG and register a season-high 166 marks.
The Demons have the ability to pick apart the Eagles with their elite ball-use, but the expected wet conditions will hinder both teams in the air.

The Demons have lost their last three encounters against the Eagles at Optus Stadium, but they have already won four matches on the road this season. Former Eagles skipper Shannon Hurn has been excellent in this matchup, averaging 27 disposals from his last three outings against Melbourne, and the experienced backman is a good chance to collect 25 or more touches this Monday.

The Melbourne Demons did well in the 2019 AFL draft, selecting Luke Jackson, Kysaiah Pickett and Trent Rivers. All three are making an impact in their second year of AFL footy, but it is Pickett – who has kicked 30.24 this season – who tends to grab the headlines. The small forward kicked 2.2 when Melbourne faced West Coast last year, and he comes into this with 10 goals from his last five outings, so Liam Duggan will have to be on his game this week. Duggan has been an excellent small defender for the Eagles for many years now, but Pickett is in good form and looks a decent play at $2.40 to kick multiple goals this Monday night.

Melbourne to win by 25+ points

Last week’s results cannot be ignored, which is why we think the Demons are primed for another big win. Clayton Oliver and Christian Petracca have dominated all season, while Steven May and Jake Lever have gone to another level in defence. If the Eagles fail to put any pressure on again this week, the Demons could win this game by over 40 points.

Shannon Hurn to get 25+ disposals

Shannon Hurn’s 300th game did not go to plan, but the West Coast champion should bounce back against one of his favourite opponents. Hurn’s season-high disposal counts for both 2019 and 2020 came against the Demons, who have struggled immensely with the experienced defender. We think Hurn will have another day out against the Dees and gather 25 or more disposals.

The Demons will break their three-game losing streak against the Eagles at Optus Stadium with a big victory. Kysaiah Pickett will put on a show in front of the big sticks in Perth, while Shannon Hurn will surpass the 25-disposal mark for the eighth time this season.