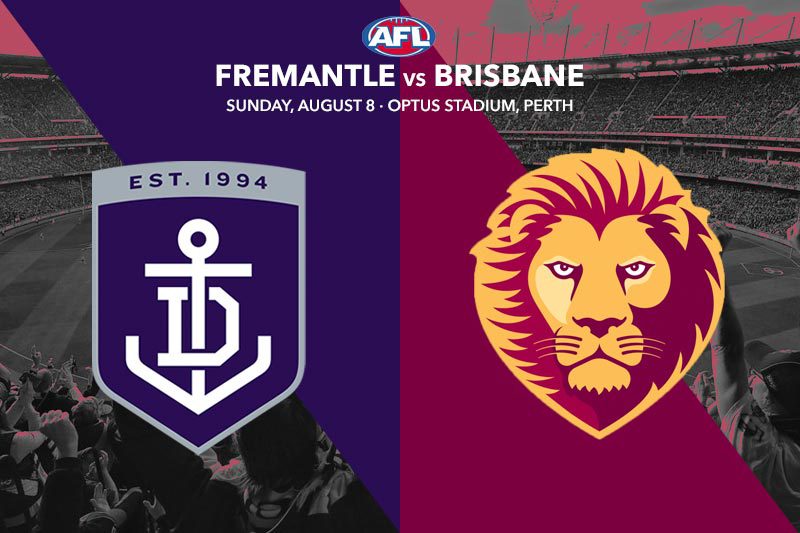 Two top-eight teams will clash at Optus Stadium this Sunday when the Fremantle Dockers host the Brisbane Lions in round 21 of the 2021 AFL Premiership season.

Despite losing three of their last four contests, the Lions have already done enough to guarantee a spot in the finals. The Dockers jumped into eighth position on the AFL ladder after a gutsy win over the Tigers in round 20, but their spot is still up in the air with three rounds remaining.

Chris Fagan’s squad has no new injury concerns, but we cannot see the Lions entering this game unchanged after their horrific performance against the Hawks last week.

Fremantle’s Alex Pearce will return to full-back this Sunday after missing last week with concussion, while Connor Blakely should hold his spot after an excellent performance as the medical sub.

The Brisbane Lions have been criticised for their sloppy finishing in recent years, but they’ve cleaned up that department and now rank sixth in the AFL for goalkicking accuracy. On the other hand, the Dockers have been atrocious in front of the sticks this season, ranking last in the competition at converting shots on goal.

Brisbane has started slowly over the last month, trailing at quarter-time in each of the club’s last three games. The Dockers have started their last two matches in excellent fashion, leading both at the first break. We think Freo will win the first quarter this Sunday against the sluggish Lions, which is paying $2.10 at Sportsbet.

Luke Ryan and Daniel Rich are two of the best backmen in the competition right now. Ryan gathered 27 disposals against the Tigers last week, while Rich recorded a season-high 32 touches against the Hawks. Both like to build off half-back with their penetrating kicking, making them two of the most valuable players on the ground. They also take a majority of the kick-ins for their sides, which helps pad out their disposal counts. We think both players will collect over 25 disposals this weekend, but the better value lies with Ryan at $2.50 with Sportsbet

Fremantle to win by 1-39 points

The Lions have not played any inspiring football since Eric Hipwood went down with a season-ending knee injury a month ago. Alex Pearce’s return will bolster the Dockers’ defence, which was also recently reinforced upon the inclusion of Hayden Young – last week’s Rising Star nominee. We see the Dockers pulling off another important upset this weekend.

Luke Ryan to get 25+ disposals

Luke Ryan did not get a chance to play against Brisbane in the reverse fixture earlier this year, but past performances suggest the tall defender should go well this weekend. Ryan collected 32 disposals against the Lions in his last full-length game against them, while he also collected 21 touches against them in shortened-time last season. The 2020 All-Australian is in excellent form and will keep his momentum rolling this week at Optus Stadium.

Fremantle will start strong against Brisbane and hold its lead for the entire afternoon, as we think the Lions’ form-slump will continue. Luke Ryan will star in the backline as the Dockers register an important win.