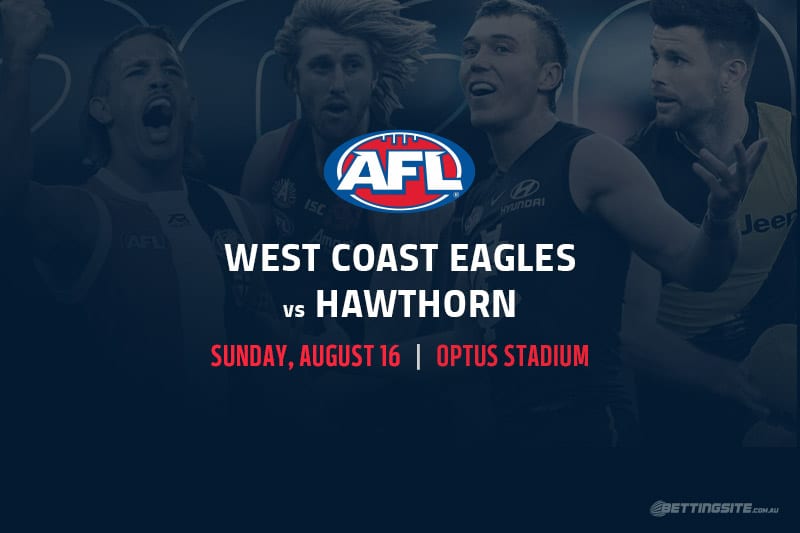 Adam Simpson’s Eagles struggled early in the season when hubbing on the Gold Coast, but since returning to Perth they have won four in a row and bolted to the head of the 2020 AFL Premiership betting.

Alastair Clarkson’s Hawks have been hard to pick in the past fortnight, as they lost to the Swans, ran over the top of Carlton and then fell short against Fremantle.

This will be Hawthorn’s third consecutive match at Optus Stadium, and that might prove beneficial for the visitors as they prepare to face the hottest team in the league.

There were no new injuries for the Eagles after they beat the Blues, but they are hopeful star defender Jeremy McGovern will overcome a thumb issue and take his place in the side.

Isaac Smith couldn’t finish the game against the Dockers after absorbing heavy impact into his shoulder, but he is a chance to play after scans failed to find any significant damage.

Most games between West Coast and Hawthorn have been tense since the 2015 finals series, where the Hawks won the qualifying final and went on to beat the Eagles in the big dance.

Nic Naitanui has been feeding Tim Kelly more than ever in the past few matches, leaving Luke Shuey out of the spotlight. We believe Shuey will run the show against the Hawks this week considering how he has dominated them in the past, including a career-high 39 disposals against them last season. Using his deceptive strength and running capacity, Shuey will be hard to stop this Sunday.

Other than the prolific Tom Mitchell, the Hawthorn midfielders haven’t been racking up big numbers of late. Jaegar O’Meara has been a go-to option for Alastair Clarkson in the middle, where he has been efficient against the Eagles. O’Meara had 36 and 27 touches in his most recent outings against West Coast, and we suspect he will be around the mark again this weekend.

Josh Kennedy has been immense for the Eagles in the past few weeks, but the impact of Jack Darling should not be underestimated. Even though all eyes have been on Kennedy, Darling has kicked multiple goals in five of his last six matches. He also kicked seven goals across his last two matches against the Hawks, who have struggled to contain dominant key forwards in recent times.

Alastair Clarkson has made footy very difficult for Tim O’Brien this season, moving him around the ground and changing his role on a regular basis. O’Brien kicked four goals in his last game against West Coast when he stayed deep inside 50, which is exactly what the Hawks need this week. If O’Brien starts forward and stays there, he should hit the scoreboard at least once.

First quarters have been important this season, as most matches have been decided in the early portion of the contest. The Eagles and Hawks have been hard to pick apart in the last few years, and we anticipate a tight and hard-fought opening quarter this weekend.

Although the Eagles have had everything go their way since moving back home to Optus Stadium, the Hawks have been inconsistent and could shock us with some good footy this week. Even if the visitors turn up and play well, West Coast will get over the line and make it seven wins on the bounce.