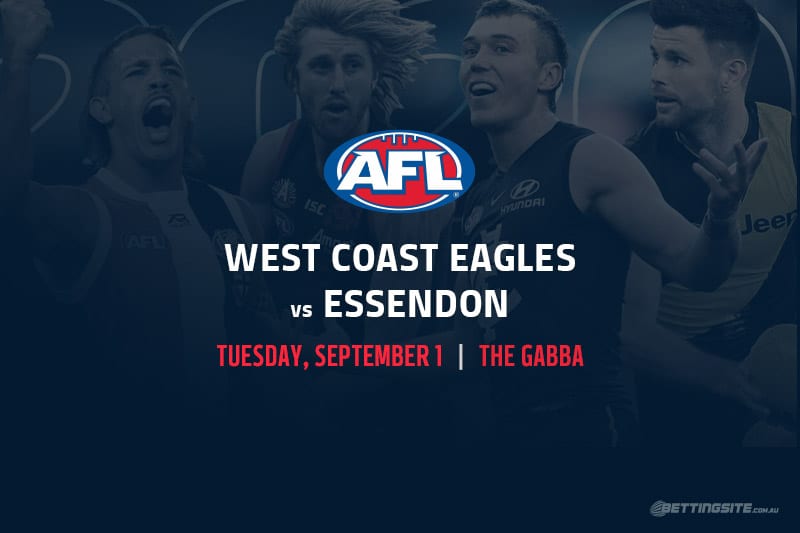 With their winning streak in tatters, the West Coast Eagles will look to bounce back when they take on the reinvigorated Essendon Bombers on Tuesday night.

Adam Simpson’s men were unbeatable in Perth, but they returned to Queensland last week and proved no match for a surging Richmond side.

Josh Kennedy is out with concussion and Jamie Cripps will have a rest, but Oscar Allen returns from a glute injury alongside Lewis Jetta, Jackson Nelson and Jack Redden.

Essendon’s season was done and dusted halfway through their clash with Hawthorn, but a stunning second-half comeback has breathed new life into their campaign.

Joe Daniher starred on his long-awaited return for the Bombers, who have decided against resting the injury-prone forward despite the short turnaround.

The Dons have another huge inclusion this week, with club captain Dyson Heppell back in the side for his first game since round two.

Jake Stringer is still searching for fitness and form after a long spell on the sidelines, yet he has kicked three goals from 10 touches in his two games back. Whether shooting at goal or stalking the stoppages, this guy does not need many opportunities to make a big impact. The $3 is crazy value for a bloke with multiple goals in five of his six starts this season.

Essendon’s midfield strategy has been difficult to fathom at times this season, but we can expect them to put a bit of work into the likes of Tim Kelly and Luke Shuey at various stages this week. Dom Sheed often flies under the radar for the Eagles, which has allowed him to pick up 20 or more disposals in four of his last five games.

Who knows which Essendon will turn up on Tuesday night? After their incredible comeback against the Hawks, we can expect them to show some spirit in this clash. The aura around West Coast is gone after the loss to Richmond, and Kennedy is a huge out, so the smaller margins might be the way to go.