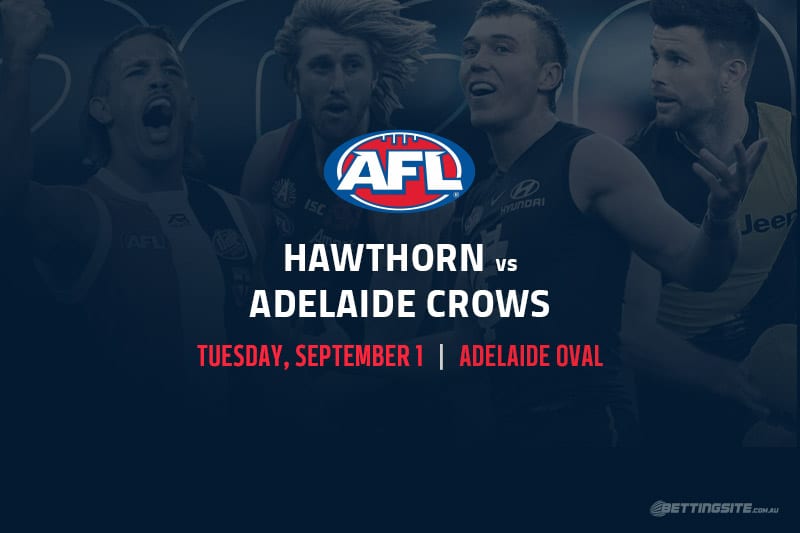 Although these clubs haven’t played their best this season, the Hawthorn Hawks and Adelaide Crows will give it their all this Tuesday evening at Adelaide Oval.

There won’t be a better chance for the Crows to get their first win of the AFL 2020 season, as a few big inclusions will strengthen their squad.

An impressive first half against Essendon turned into pure anguish for the Hawks in round 14, as they blew a 36-point lead en route to their fourth consecutive loss.

Matthew Nicks and the Crows had some much-needed respite in round 13 with the bye, which also gave them time to get Brad Crouch, Tom Lynch and Daniel Talia fit for this week.

Hawthorn forward Jon Patton suffered another injury in the defeat to the Bombers, blowing out his plantaris tendon early in the contest, while Isaac Smith and James Frawley are close to a return.

It has been a frustrating 2020 for Rory Sloane, but this contest will favour the experienced midfielder. The last time he tackled the Hawks, back in round one of the 2019 season, Sloane had 36 touches and kicked a goal. With Jaeger O’Meara still sidelined for the Hawks, Sloane will have an easier run at the footy in the middle.

At least one forward each week has thrived against the Crows, and this looks like a good matchup for Luke Breust. He has kicked multiple goals three times this season while only going goalless twice, making him a consistent performer inside 50. Breust has kicked only one goal in the past three rounds, but he should have no shortage of opportunities against the Crows.

The week off will have done Adelaide a world of good, while Hawthorn has not had the same amount of time to recover and prepare for this contest. The Hawks should control the game in any case, but the Crows’ recent efforts suggest they can make a game of it until the final quarter.