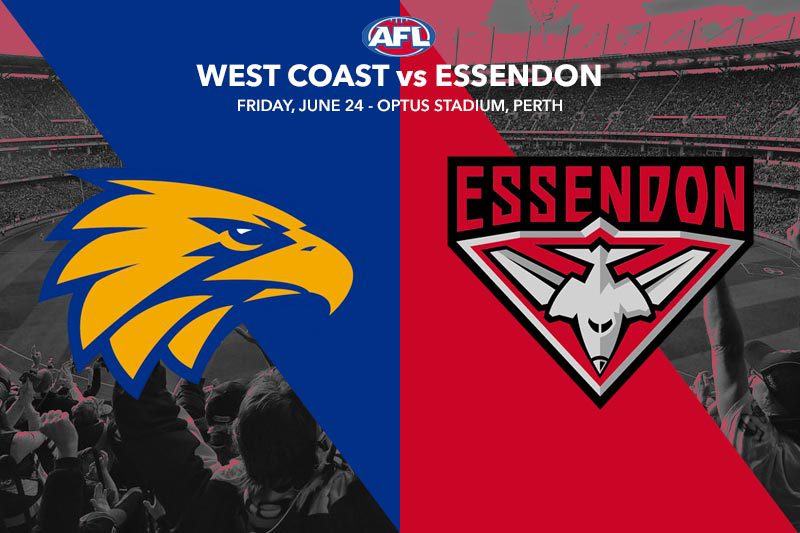 This upcoming clash between the West Coast Eagles and Essendon Bombers at Optus Stadium will be the second of two AFL Friday night games, and it should be a cracking contest.

You could not have asked for a better performance from the Bombers last week, as they came out and silenced their doubters with a big win over the Saints while showcasing an impressive brand of attack and defence.

Even though the Eagles did not register a victory last weekend, they still took it up to Geelong in a very honourable effort.

The Eagles have struggled all season with injuries and COVID protocols, but they may be in for a big boost this week if Nic Naitanui passes fit at training.

Sam Draper was awesome for the Bombers last week against the ruck duo of Patrick Ryder and Rowan Marshall, but the return of Naitanui would make his night very difficult.

Neither team has been impressive throughout the season, but they both come into this match with some momentum and fight, which should make for an enthralling contest.

Dom Sheed did not explode back onto the scene in his first game of the season last week, but he could do some damage this Friday night at home. Dylan Shiel has been much improved in the last two weeks, as he is finally providing the Bombers with the elite midfield impact they expected when he first made the move across from the Giants. Sheed and Shiel play a very different style of game, but they are two barometers for their side that each can rack up plenty of disposals.

The fight West Coast put up against the Cats was impressive, even though it was not enough to win the match. The Bombers were phenomenal against the Saints, but we are yet to see them string together a couple of winning efforts. The Eagles may not have another chance to win a game for the rest of the season, so we think they will throw everything into this one and keep it close.

Although Harrison Jones is not the top dog up forward for the Bombers, he is more than capable of taking a mark or kicking a goal at ground level. Jones kicked a couple of majors against the Saints last week, his second consecutive pair of goals so far this season. Jones is developing into a promising partner alongside Peter Wright, which gives us belief he can put through another pair of goals.

We are backing in the Eagles to make it a close finish in the West, with Dom Sheed to star in the middle in his second game back from injury, while Harrison Jones kicks a pair for the Dons.