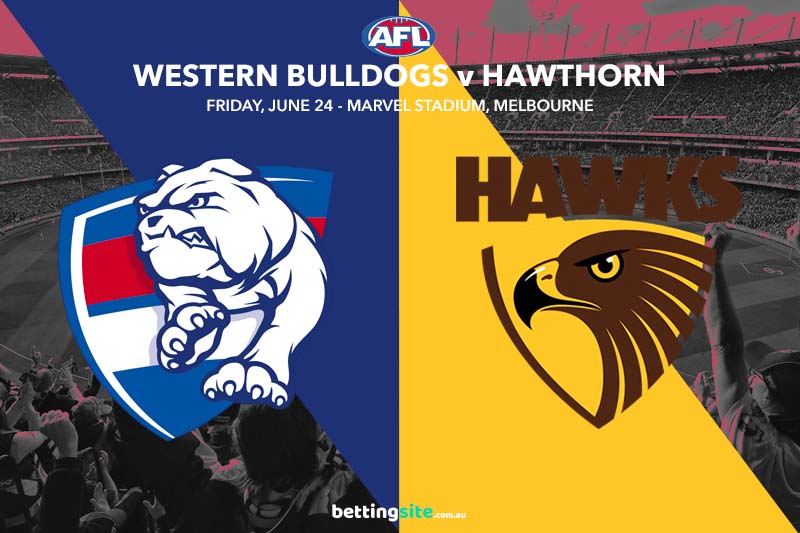 Can the Western Bulldogs continue their push for the top eight when they host the Hawthorn Hawks at Marvel Stadium in round 15 of the 2022 AFL season?

The Western Bulldogs were far too strong for the Giants in round 14 and canny punters landed some very nice bets. Studied scrutiny of the Dogs stats reveals their form is much stronger than it might appear, and we are keen on their chances to keep the momentum rolling against the hot and cold Hawks.

According to our numbers, the Bulldogs lead the comp in inside 50s. They rank second in disposals, fifth in kicks, first in clearances despite being fifteenth on hit-outs, and fourth in goal assists. One could argue they deserve to be safely situated in the top four on the ladder at this point.

They are not, mysteriously, and must keep winning to press for September action. If you are looking for some value in premiership markets, consider having a little splash on the Dogs at the bit odds on offer.

While boasting significantly inferior overall stats, the Hawks have sprung some surprises this season. While their worst efforts are very poor, they can not be discounted in any contest on the off chance they produce their elusive A Game.

In recent weeks the Hawthorn Hawks have defeated the ladder-leading Lions, lost by a mere 4 points to the Magpies, and gave the high-flying Dockers a scare in WA. They were also belted by the Suns by 67 points in this run of games and we currently have them branded as unreliable conveyances unworthy of investment with the top bookmakers.

Bulldog midfielder Tom Liberatore flies under the radar a bit these days, but the 186-game veteran continues to produce the goods. Few players have the same in-and-under abilities, and Libba is averaging 24 disposals, 4.9 tackles, and 6.4 clearances this season. If there’s a rugby-style scrum formed, the man most likely to emerge from the pack with the ball in hand is Tom Liberatore.

Hawthorn mid Tom Mitchell is at a similar stage of his career and continues to generate solid numbers. Mitchell is averaging 27.7 disposals, 5.6 clearances, and 4.5 tackles this year, not bad for a player in a side that is languishing at 4-9. Liberatore versus Mitchell is our key match-up here.

The Dogs are not as short as expected here and the line has been set at a tempting 16.5 points. The Hawks are coming off the bye and might be a little cold early, and if the Dogs can get on top in the first quarter, we expect them to easily cover that line. As you can tell, we are confident the Dogs can string together some nice results in the coming weeks, and we will be taking a solid swing at the Bulldogs -16.5 points, available with most bookies. The Hawks are some chance of they produce their very best, but the Dogs are up and running having won 4 of their last 5, and we are officially onboard.

To add some value to this tip, we have constructed a same game combo that will hopefully tip some liquidity into your bankroll. We are going Bulldogs -16.5, into Aaron Naughton 2+ goals, into Tom Liberatore 25+ disposals. This three-legged wager will return $4.10 courtesy of Palmerbet.