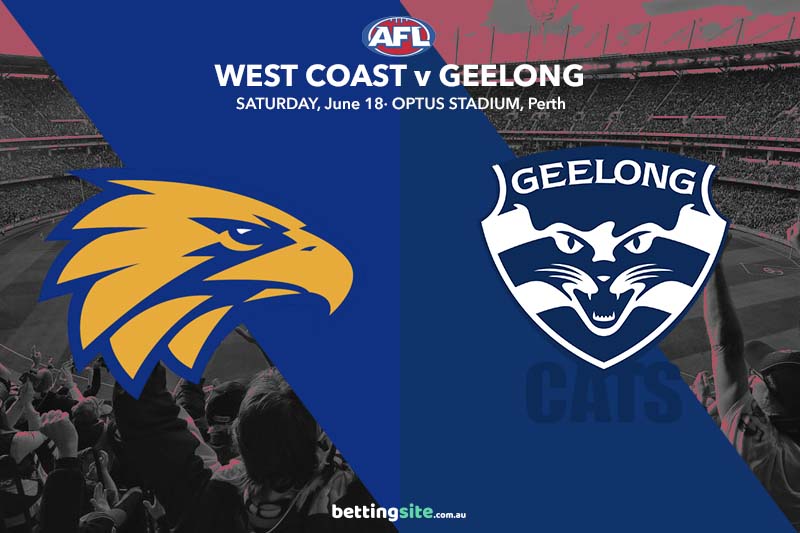 Can the ailing West Coast mount any challenge when they host the high-flying Geelong at Optus in a Saturday twilight fixture in AFL round 14 action?

There’s not much positive to say about the West Coast season thus far, other than the miraculous away victory over the Magpies that cost punters a small fortune. They sit at the bottom of the AFL ladder and show no signs of climbing any higher.

The Eagles have a lengthy injury list, their reserves cupboard is bare and they are keenly vying for wooden spoon favouritism. They did manage to kick 13 goals in round 10 versus the Giants but have otherwise been unable to post a decent score. Our stats have them ranked last in the comp for inside 50s and second last for goals.

The Cats are travelling well enough and will be grateful for the four premiership points on offer here. We are expecting a top eight logjam as the season closes, and the Cats will need to win away games to hold their spot.

Geelong is fifth for inside 50s right now, and with Cameron and Hawkins fit and firing in unison, they will fancy their chances for a deep September run. In fact, the Cats are looking good on most of the key statistical indicators — clearances, tackles, disposals, and marks. Our numbers team has them pegged as top four or five in all the crucial departments. The only knock is their recent finals form, which must prove a consternation for management. Presumably sport psychologists will be utilised when the time is right.

West Coast key defender Tom Barrass has had a busy year. His numbers are solid without being extraordinary, averaging 13 disposals, 7.2 spoils, and 2.6 intercept marks across nine games. He will have a big job trying to contain the Cats firepower here and will need to hold his nerve when the forward pressure starts to mount.

Geelong key forward Jeremy Cameron is averaging 3.2 goals and 5.4 marks per game this season and sits second in the Coleman Medal count by a single goal. His athleticism makes him a very tough match-up, and when he gets loose defenders start to panic. We are tipping a big haul by the firing forward here. Barrass versus Cameron is our key match-up.

The Cats are predictably short here, and the early line has been set at a heathy 46.5 points by most Australian online bookmakers. It is hard to imagine the beleaguered Eagles will be able to match the Cats anywhere on the park, so a blow-out is a definite possibility.

The only danger is that Geelong runs up an early 30-point lead and then slips into cruise mode. This makes the total points bet an unappealing proposition. So, we will take the Cats at the line, and hope Jeremy Cameron continues his recent goal scoring spree. A bag of five or six big ones will do his Coleman Medal chances no harm. Geelong -46.5 is the tip, with this available on PalmerBet.

If the Cats are to cover the line, we can expect some stand-out performances from key players. For the value-hunters we have linked some of these markets to create a same game multi that will have you sweating every play. We will link Geelong -46.5, into Jeremy Cameron 3+ goals, into Tom Hawkins 3+ goals. This goal heavy combo will return $4.59 courtesy of Unibet Australia.