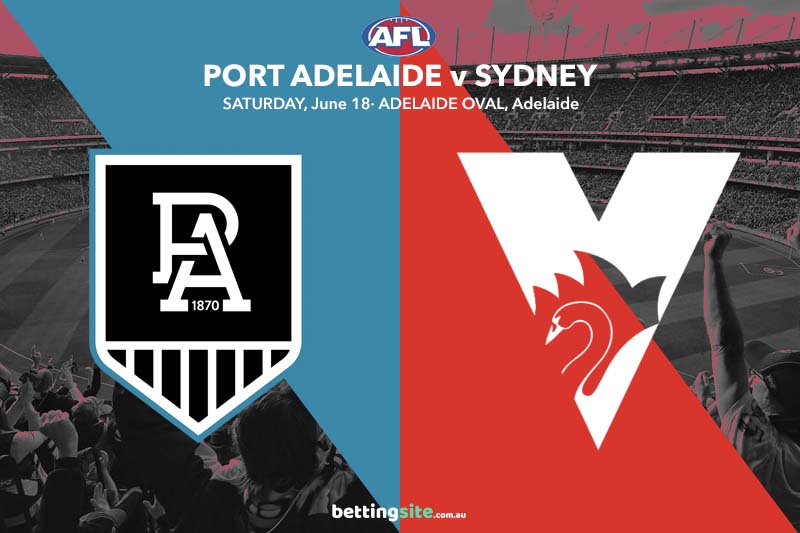 The Sydney Swans will look to break a five-year losing streak against Port Adelaide at the Adelaide Oval in Saturday afternoon AFL action.

John Longmire and the Swans have not beaten Ken Hinkley’s Power since the 2016 AFL season, but they will start favourites this weekend coming off their round 13 bye.

The Power were unlucky not to upset the Richmond Tigers last week, as they lost by just 12 points despite hitting the front in the final term.

Only a couple of the Power’s best 22 players will be sidelined for this match in Scott Lycett and Orazio Fantasia, as their list has remained relatively healthy in recent weeks.

The Swans will welcome back Lance Franklin after he finished serving his one-week suspension from round 12, meaning the superstar has basically had two weeks off to recuperate.

Tom Hickey is a question mark for the Swans heading into this contest, which means former Port Adelaide ruckman Peter Ladhams may need to ruck solo against his former side.

With just 10 matches left in the season before the finals kick off, the Power cannot afford to lose another match, while a win would keep the Swans in reaching distance of the top four.

Charlie Dixon may be the big dog up forward for the Power, but we have enjoyed the emergence of Todd Marshall by his side. Marshall is a very accurate kick at goal and has showcased his marking prowess in recent weeks. Paddy McCartin has revived his career as a very sound defender, and although he may need to use his big frame against Dixon, we think he will matchup with Marshall at stages.

Todd Marshall will be feeling great coming off a very handy three goals against the Tigers, but whether he can keep up his good work is the main question. Look out for Marshall to match-up against both Paddy and Tom McCartin throughout the day, as he has enough athletic traits to kick goals against either defender.

Although the odds are very close heading into the weekend, we will consider this an upset win for the Power. The inclusion of Charlie Dixon and resurgence of Travis Boak in the midfield adds more dimensions to their list, which they desperately needed earlier in the season. The Swans are coming off a big win against the Demons, but we think they will struggle on the road against a desperate Power outfit. You can get a juicy $2.45 via many of the top betting apps.

Todd Marshall 2+ goals
This young gun has been very efficient for the Power this season, as Marshall has kicked 23.5 in an almost-flawless display from set-shots. Marshall has kicked multiple goals in five of his last seven contests against quality defenders, which has effectively led to the turnaround in Port Adelaide’s season.

Todd Marshall will keep up his solid efforts up forward and get Port Adelaide a much-needed win, while James Rowbottom will be one of the valiant Swans who played well in the close loss.