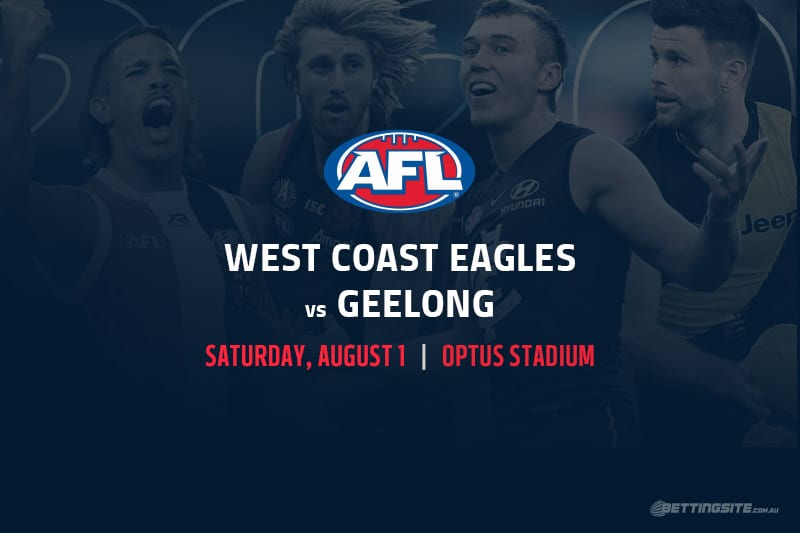 With Joel Selwood and Gary Ablett still sidelined, the Cats will need to be at their best when facing the newest 2020 AFL Premiership favourite.

The Eagles were ominous against Collingwood last week, sending a powerful message to the rest of the league with their 66-point win.

Josh Kennedy is back to Coleman Medal favouritism after his seven-goal haul against the stingiest defence in the competition, so the Geelong back six had best be on their game.

The Cats were good enough to hammer a battered and bruised Fremantle squad in horrendous conditions last week, but they struggle in the middle without a genuine ruckman to take on Nic Naitanui.

Tom Hawkins was given a week for a wayward elbow on Freo defender Luke Ryan, but Geelong successfully challenged the decision and the big forward is free to play.

On a similar note, Elliot Yeo was handed a suspension for striking Collingwood’s Rupert Wills but had the charge downgraded to a fine.

Jeremy McGovern was a late withdrawal last week, but the star defender will push for selection as the Eagles go in search of a fifth consecutive win.

Coming up against your old team always motivates you, and Tim Kelly’s form line is a big concern for his former club. The classy midfielder had a season-best performance against the Magpies last week with 29 disposals, six clearances, six inside 50s and a goal, and we think he will maintain that momentum with a big outing against the Cats.

Stewart has been a rock in defence for the Cats over the last few seasons, winning two All-Australian selections in only three years of senior footy. The Eagles know all about Stewart’s crafty offensive capabilities, as he recorded 25 and 24 disposals in his last two matches against West Coast. We are backing him to continue that trend this weekend.

Tall forwards dominate the sky in Western Australia, as Josh Kennedy, Jack Darling, Jake Waterman and Oscar Allen make up the league’s loftiest attack. Allen is the underrated pick of the lot, as he is strong in the air while holding his own at ground level. Expect Allen to thrive with Darling and Kennedy occupying Geelong’s two best defenders.

The West Coast back line is very good at cutting off kicks into the 50, but Patrick Dangerfield is the kind of player that could cause a mismatch or kick a long-range goal. Tom Hawkins kicked three great goals in the wet last week but looked tired after each contest, which is why we are staying clear of the big man and opting for Danger to push forward instead.

Both teams to score 50+ points

A high-scoring match will be on the cards if the Eagles play the same way two weeks running, but we think the Cats can put 50 points on the board too. If they get the service from midfield, the likes of Gary Rohan, Esava Ratugolea and Gryan Miers will do their bit and keep the scoreboard ticking over for Geelong.

The Eagles look far too good for the injury-riddled Cats to overcome this weekend. Nic Nat will be unstoppable in the centre against part-timers like Ratugolea and Mark Blicavs, giving first use time and time again to one of the best midfields in the comp.