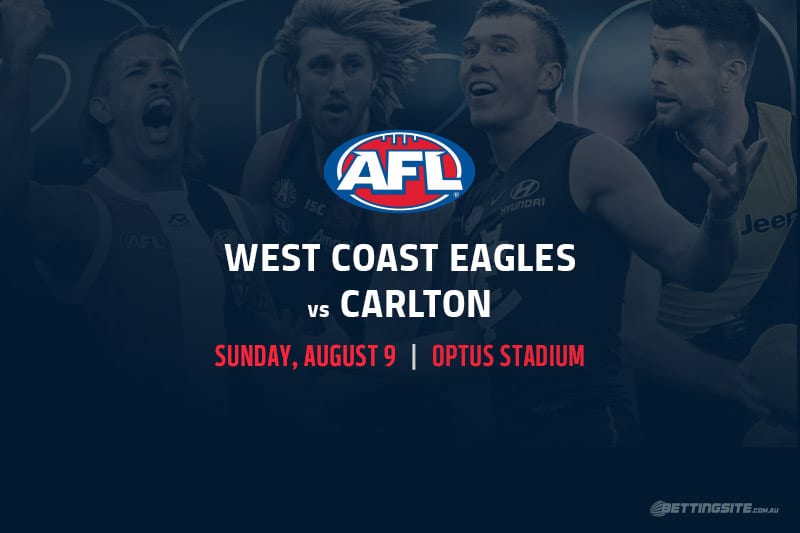 The Carlton Blues travel to Western Australia this weekend to take on the premiership-favourite West Coast Eagles at Optus Stadium.

Adam Simpson has built a fortress in Perth, where the Eagles smashed Collingwood in round nine and edged out Geelong in round 10.

Coming off the bye, the Blues have had plenty of time to reflect on their disastrous collapse against Hawthorn last Friday.

Jeremy McGovern and Liam Ryan must prove their fitness before making a return to the West Coast lineup this Sunday, but both are expected to play having trained well during the week.

Carlton’s 4-5 record puts the club in a position to attack the top eight, but David Teague’s men will need to pinch a few upsets along the way to remain in contention.

It can be hard to single out a West Coast midfielder when they are all in good form, but Andrew Gaff’s record against the Blues stands out. He had 28 and 31 touches in his last two meetings with Carlton, while his fellow Eagles on-ballers underachieved in those games. Gaff runs all day on the wing and provides great options coming out of defence and going forward.

Kade Simpson has delivered week after week for the Blues for many years, and one of his best-ever performances came against the Eagles in 2018 when he notched a career-high 30 kicks. The Carlton veteran also had 25 touches against West Coast last season, which is why we will be tipping him to get over 20 disposals this Sunday.

It has been hard to miss the form of Josh Kennedy in the last three rounds, as the former Blue has kicked 15 goals to burst into Coleman Medal contention. Kennedy is always dangerous, whether he is leading up the ground or remaining deep, and we think he is a great chance to break out early and boot the first goal of the game.

Now in his second year in the AFL system, Michael Gibbons has backed up his solid first season with some standout performances in 2020. With seven goals in nine matches, Gibbons is one of the more dangerous small forwards for the Blues. His career-high goal tally in a game is three majors against the Eagles, and we think he likes the matchup and will kick at least one this Sunday.

The conditions may not be perfect in Perth this weekend, but we still think these two sides can pile on plenty of goals. Even if the ground is wet, players such as Elliot Yeo and Patrick Cripps can move the ball forward with purpose so the likes of Liam Ryan and Eddie Betts can thrive roving packs and crumbing goals.

We cannot see the Blues causing an upset here, as the Eagles have regained their rhythm since returning from their Queensland hub. Nic Naitanui is beating all comers in the ruck, the West Coast midfielders have hit their stride and the forwards are firing. It would take something special from Carlton to win this.