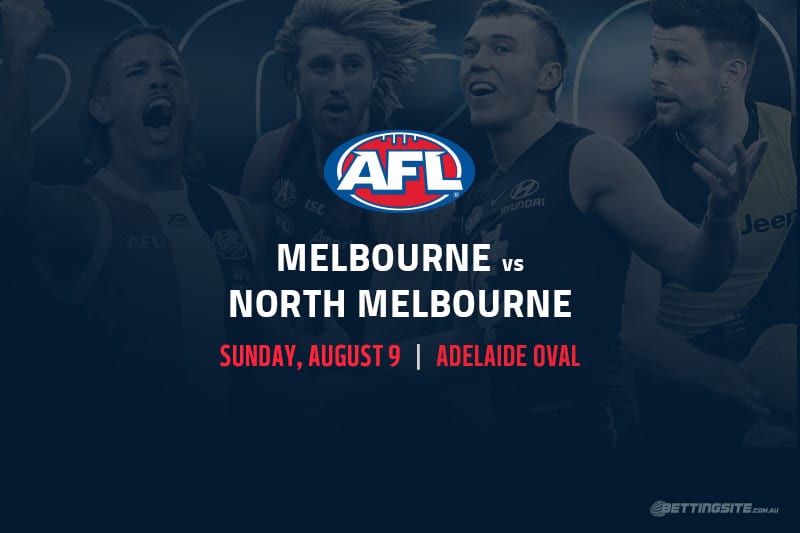 The craziness of the AFL 2020 season continues this Sunday night when the Melbourne Demons and North Melbourne Kangaroos become the first Victorian teams to face off at Adelaide Oval.

Although the Dees bounced back from a rough week to hand the Adelaide Crows their 10th consecutive defeat of the campaign, a big win over the bottom side doesn’t tell us much.

Clayton Oliver was best on ground in that game with 34 disposals and a goal, but can he back it up against stronger opposition?

While North Melbourne also enjoyed a big win over Adelaide, they followed it up with a 33-point loss to Geelong on Wednesday night.

Ben Brown has played through some bone bruising this season, but now he could miss the remainder of the year after sustaining a nasty knee injury against the Cats.

That loss could be offset by the return of 22-year-old forward Nick Larkey, who will test out his ankle at training this week.

Both Simon Goodwin and Rhyce Shaw have been under the pump at various stages this year, but a win in this clash would silence the critics for the time being.

Ed Langdon is going to be a threat this weekend, both from an athletic standpoint and based on previous form. Langdon has a good record against North back from his days as a Docker, tallying 26 and 25 disposals in his last two games against the Roos. With his big engine and blistering speed, Langdon should find plenty of the footy on the wing for the Demons.

A move from the back line into the midfield has been positive for Luke McDonald, who collected 35 disposals against the Crows in round nine and was decent against the Cats with 18 touches. The Kangaroos will look to McDonald to combat Melbourne’s in-form midfielders, as his big body and defensive hustle make him a difficult opponent to play on.

Christian Petracca could have had a huge night against the Crows, but some wayward kicking left him with only three minor scores to his name. There is no denying this guy’s red-hot form, however, and the Roos are going to have a hard time keeping him quiet. Whether he is setting them up or kicking them himself, you can bank on Petracca having a big hand in Melbourne’s forward forays.

The decision from Rhyce Shaw to move Bailey Scott forward has paid off so far. The second-year player has kicked six goals from his six matches, including a bag of three against the Blues. Scott has shown he can hit the scoreboard on a regular basis, so we like the $2 about him to kick a major at some stage this Sunday.

Goals have not always been easy to come by for these teams. Although they have both lifted their output in the past month, we still don’t think they are consistent enough going forward. The Demons have been better since Sam Weideman returned to the 22, but Robbie Tarrant will keep him busy this week, while the absence of Ben Brown and possibly Nick Larkey could be devastating for the Roos’ forward structure.

Max Gawn and Todd Goldstein’s battle in the ruck will be fascinating, but the Melbourne midfield is a class above North’s and should get on top no matter who has the upper hand in the hitouts. The Dees should win this comfortably.