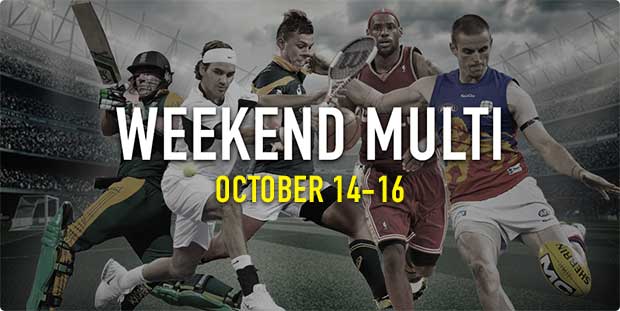 THANK God the English Premier League is back.

The international breaks can be downright boring at times.

But we’ve got a full slate of English Premier League games kicking off this weekend to help us win come cash on the punt.

There is also a huge round of NFL action, as well as some A-League, NBL and a little bit of Matador Cup cricket.

So much to choose from, so little time.

Let’s see if we’re on the money.

It’s not like South Australia has been a world beater in the first four matches of the Matador Cup,, but it has been better performed than the youthful Cricket Australia XI – just. The Redbacks registered their first win of the competition, chasing down New South Wales total of 208 in less than 40 overs, cracking 4/209. Tom Cooper put an emotional week where he had to take the stand at the Phillip Hughes coronial inquest to cake 47 off 57 balls, while Callum Ferguson continued his solid return from injury with an unbeaten 73. The Cricket Australia XI has not won a game yet as it’s band of young bucks struggles under the pressure of the domestic one-day cup. Winning form is good and the Redbacks should get the job done on their home deck.

After a slow start to the English Premier League season Arsenal has been on an absolute tear, reeling off five straight wins, including a 3-0 decimation of Chelsea. The Gooners are the form side in the competition, although they were lucky to escape from their last outing, requiring a controversial late winner from central defender Laurent Koscielny, with many claiming he bundled the ball over the line with his arm. Whinge as they may, the Gunners claimed all the points and they head home to face Swansea City buoyant. You couldn’t say the same for the Swans. They have won just once in the past five rounds and dropped their last two to big clubs Manchester City and Liverpool. It’s about to be third time unlucky.

Sydney FC looks like it might just be building a monster, stepping out on the park in the Sydney Derby in front of a record A-League crowd and absolutely throttling their cross town rivals Western Sydney Wanderers on the weekend. It was 4-0 the score as Filip Holosko, new recruit Bobo, veteran Alex Brusque and Brandon O’Neill feasted on the Wanderers’ lacklustre defence. The Central Coast, meanwhile, looked absolutely shot when they let Perth Glory slot three past them before half time, but, in one of the more remarkable comebacks in A-League history, they bounced back to square the ledger before the final whistle. Roy O’Donovan struck twice and Liam Reddy helped bail them out of jail and leave Perth with a point. The Glory is a very good team, but we don’t think the Sky Blues will take the foot off the pedal if they manage to take the lead and this one should go to the home side.

Are the Brisbane Bullets the real deal? We’re about to find out in week two of the NBL. The Bullets returned to the NBL after years in the wilderness as a side many tipped to finish close or on the bottom of the NBL ladder. But they looked more like a title contender on the weekend, when it defeated the Perth Wildcats in the season opener, 72-65 and then backed it up with a road win over the Sydney Kings, 77-73. You would have got very long odds for those results, but imports Torrey Craig and Jermaine Beal look to have formed a devastating partnership for the NBL’s newest club. They take on an Adelaide 36ers side who would be lying if they said they thought they could beat Melbourne United and its pack of stud recruits. But, somehow, they did it, hitting the road for an 87-79 win on the back of 30 points from speedy point guard Jerome Randle and 17 points and seven boards from Daniel Johnson. The NBL is a funny competition and difficult to predict, but we reckon the Bullets will fancy their chances at home to the Sixers – and so do we.

Tom’s back. That is all you need to know. The New England Patriots’ superstar quarterback spent four weeks watching from the sidelines as his side wheeled its way to a 3-1 record, serving a suspension over the Deflate-gate saga. Now he’s back and he has a chip on his shoulder. Just ask the Cleveland Browns, who he lit up for three touchdowns and 406 passing yards in a ridiculous display that has every other team fearful. The Bengals will be no different. At 2-3, life is a struggle in Cincinnati and they are simply not ready to go into the Pats’ home and deal with angry Brady.