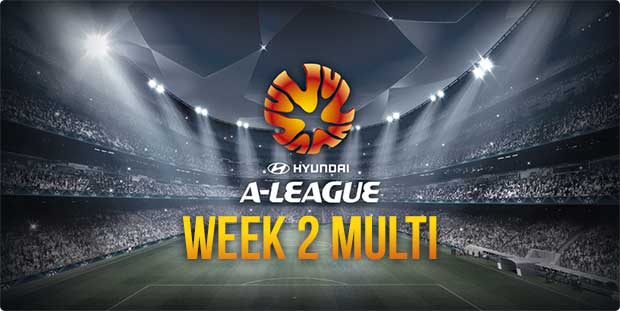 THE game of football can be an interesting dichotomy sometimes – what some pundits deem delightful, punters may label diabolical.

The opening round of the A-League season gave us last minute equalisers, red cards, incredible comebacks and a derby smashing that nobody could have predicted.

It bodes well for the impartial observer but for those who invested their hard earned – including the team at BettingSite.com.au – it was an absolute nightmare.

Thankfully in the second round of A-League action the international games are complete, so all those Socceroos and All-White representatives who failed to take to the pitch in the opening week of the season will be available for selection, making it – at least on paper – easier to predict a winner.

After a disappointing multi last week the team here believe we have seen enough of the teams to gauge exactly where they are at, and have put together a parlay that should net us a nice return in round two.

All odds for the second round of the A-League season were provided by Sportsbet.com.au, who is offering punters a fantastic inducement for those yet to sign up.

Round 2 selections for the A-League multi of the week:

The grand final rematch between Adelaide and Western Sydney kicks off the multi this weekend, and we could not be more excited.

The Reds were unlucky not to take away the full three points against Newcastle last week despite conceding the opening goal.

While Adelaide will be disappointed they could only manage a 1-1 draw they will be buoyed by the fact it was their 11th straight away trip without a loss.

The Wanderers will just be content to get out of the NSW capital after their dismal showing in the Sydney Derby.

Western Sydney conceded four goals to their bitter rivals and were at times listless as the Sky Blues did as they pleased for the majority of the second half.

A big lift will be needed if they are to trouble the Reds on Friday night and overturn a run that has seen them win just once against the South Australians in their last nine outings.

We are backing the home side to register their first win of the 2016/17 campaign.

Sydney is beaming after their incredible 4-0 drubbing of cross-town rivals the Wanderers, and there is plenty to be happy about on the blue side of town.

Marquee man Bobo was at his brilliant best in his first appearance in the Sky Blue, setting up the opening goal for Filip Holosko before netting one himself just minutes later.

The Brazilian firmed into $8.50 for the Golden Boot on the back of the performance at Sportsbet.com.au and is at the $1.72 quote to score at anytime throughout Saturday’s match.

The Central Coast Mariners are the $2.40 favourites for the wooden spoon at Sportsbet.com.au, but after their magnificent come from behind 3-3 result against Perth away from home, there is plenty of optimism around what can be achieved this season.

Central Coast might have been brave last week coming back from a three goal deficit but an effort like that takes an enormous amount of energy and when that is compounded by the travel the Mariners have put in, it all points towards a flat performance the following week.

Sydney FC to win is the safest bet this weekend in the A-League.

The third leg of our multi this week rolls into Sunday as the Roar travel to Newcastle to face the Jets at the freshly named McDonald Jones Stadium – formerly Hunter Stadium.

Brisbane left it to the last minute to snatch the points away from the Victory on Friday night after all looked lost, but the same mantra that applied to the Roar last season clearly applies to this campaign – never count us out.

The Jets were expected to be one of the cellar dwellers this season – as their $3 odds at Sportsbet.com.au for the wooden spoon would suggest – but after taking a point away from the Reds last week, maybe the 2016/17 campaign will not be as bleak as many predicted.

One thing that is on the side of the visitors is history. The Roar are unbeaten in their last six matches against the Jets and have won two and drawn once in their last three trips to Newcastle.

The Jets have also failed to register a win in their last seven attempts in the A-League and we are expecting that poor run to continue. We are backing the Roar to keep our multi alive.

The Glory and the Phoenix close out the second round of the A-League action.

Both teams will be looking to rebound after disappointing starts to the season.

Wellington lost at home to Melbourne City despite having a one man advantage for most of the second half. The Kiwis failed to find the back of the net and ultimately went down 1-0.

Perth Glory’s capitulation last week at home to the Mariners was nothing short of spectacular.

The home side lead 3-0 and looked to have the game sewn up over an hour out from the final whistle but lax defending and dumbfounding challenges inside their own box lead to an incredible comeback which saw the Central Coast snatch an unlikely point on the road.

Wellington boasts a sensational record against the Glory in Perth. The New Zealanders have returned across the Tasman in the winning column from their last two visits to Western Australia.

The Perth that they faced then and the one that will present on Sunday are two vastly different teams and we are expecting the Glory to chalk up their first win of the season to close out the round and our multi.

A-League Promotions for Round 2

The international break is over and all the top flight competitions including the Premier League, La Liga and Serie A are back in full swing, which means plenty of options for that weekend soccer multi.

Sportsbet.com.au’s multi insurance deal extends to all the top-tier competitions this weekend, so punters will be able to unload on a multi knowing if one leg fails they will not be out of pocket.

A correct score bet more your style? Sportsbet has you covered.

Place a correct score bet on the Melbourne Derby this weekend and if your selection wins but you do not nail the score you get cash back up to $50.