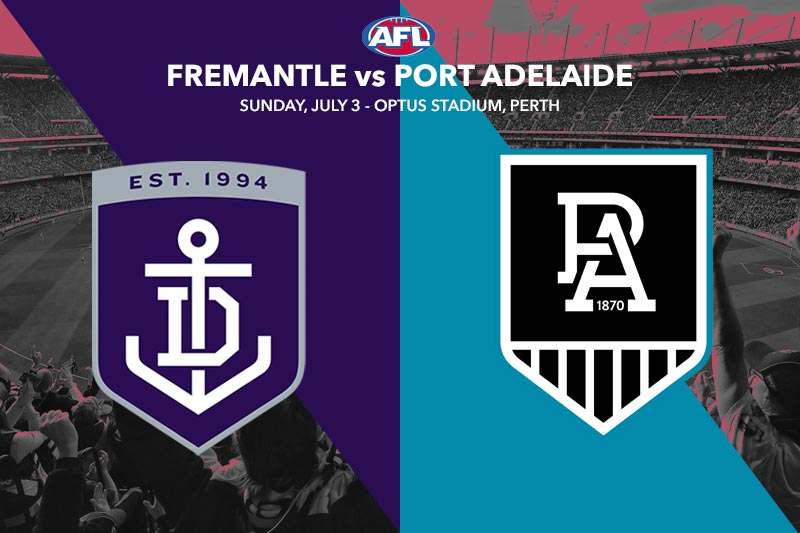 Can the Fremantle Dockers bounce back after a disappointing loss when they host the rejuvenated Power at Optus Stadium this Sunday afternoon?

The Dockers were soundly beaten by Carlton in round 15 and will need to quickly rediscover their scoring prowess as the 2022 AFL season tapers toward September. Fremantle kicked a paltry 24 points in two and a half quarters against the Blues, the kind of slump that will see them struggle to maintain their top-four ladder position.

Much like the Saints, when the Dockers go cold, they fail to generate sufficient inside 50s to have any winning hope. Freo rank an underwhelming 10th for inside 50s in 2022, meaning their forward line must capitalise on every opportunity if the team is to be competitive against the league’s best. To challenge for the flag, they must develop alternate tactical game-plans that can be rolled out should the scoring dry up like it did against the Blues.

The finals dream is still alive for Port Adelaide after their thrilling two-point win over the Suns in round 15. Port’s season has been lacking in consistent effort, but they now sit just a single win outside the top eight. They will now need to string some wins together, especially against sides higher up the ladder.

Port also rank low on the inside 50s count – 11th in the comp, and 15th in goals kicked. Their worst efforts look laboured and uncoordinated, and we will be betting against them here.

Young Freo midfielder Caleb Serong has been instrumental to the team’s strong season. The 21-year-old is averaging a tidy 25.9 disposals, 5.2 tackles, and 4.8 clearances for the year thus far. Still lightly framed, Serong should develop further into a dominant ball-winner with some more pre-seasons under his belt. Serong’s combination with Will Brodie has been a revelation for the Dockers, and we are tipping the kid to have another big game.

Port small forward Sam Powell-Pepper plays AFL footy like a man possessed. The stocky 24-year-old is one of the most ferocious tacklers in the game, while he is almost impossible to tackle himself. Powell-Pepper is averaging 15.9 disposals, 3.8 tackles, and almost a goal a game in season 2022. He hunts down everything and basically has no quit. When the chips are down for Port, look for the shiny head of Powell-Pepper to do something inspirational.

AFL bookmakers are expecting the Dockers to recapture their winning ways back on home turf, where they have a strong record against the Power. Sunny conditions are forecast, the line has been set at an enticing 13.5 points, and we are obliged to take it. Port’s inability to kick a big total makes this a relatively straightforward selection. The Dockers have been a standout all season, so we are backing Fremantle -13.5 with some confidence.

For punters looking to load up their saddlebags, we suggest a same-game multi that focuses on some of Freo’s brightest stars. We are linking Fremantle -13.5, into Caleb Serong 25+ disposals, into Will Brodie 25+ disposals, into Michael Frederick anytime goalkicker. This ambitious four-pronged attack will return $5.86 courtesy of Ladbrokes.