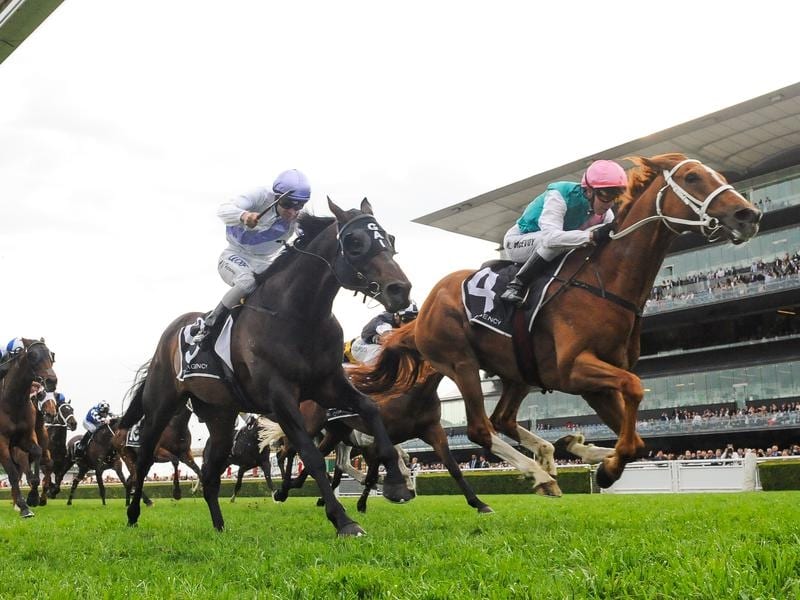 Leading Melbourne Cup contender Finche (r) runs in the Turnbull Stakes as part of his build-up.

The path to another Melbourne Cup attempt continues for import Finche when the current favourite for this year’s $8 million race returns to Flemington for the Turnbull Stakes.

The Chris Waller-trained Finche ran fourth in last year’s Melbourne Cup (3200m) at Flemington at just his second Australian start and the gelding assumed favouritism for this year’s edition with a last-start victory in the Kingston Town Stakes in Sydney.

Finche races at Flemington for the first time since the 2018 Cup in Saturday’s Group One $500,000 Turnbull and will be joined in the 2000m-race by stablemate Kings Will Dream.

A win by either would give Sydney’s premier trainer his fourth Turnbull win from the past five runnings.

Waller won in 2015 with Preferment while champion Winx won the race the past two years.

Waller expects a good showing from Finche in the Turnbull on his way towards the Melbourne Cup on November 5.

“Finche is a genuine Melbourne Cup contender in our opinion,” Waller said.

“Obviously he can stay the distance.

“Twelve months on from running fourth in the Melbourne Cup last year he’s clearly a more mature and in particular a stronger horse, and it gives me a bit of confidence to know that we’ve got the right horse.”

Finche races in Prince Khalid Abdullah’s pink and turquoise colours carried by Frankel and on display again this weekend when Enable attempts a third win in the Prix de l’Arc de Triomphe.

Kings Will Dream was third to the Waller-trained pair Winx and Youngstar in last year’s Turnbull when he was trained by Darren Weir, and he goes into Saturday’s race at his third run back from a lengthy injury lay-off.

After an eye-catching fifth in the Group One Winx Stakes (1400m), Kings Will Dream finished midfield in the Makybe Diva Stakes (1600m) at Flemington where Waller believes he might have been ridden a bit too close to the pace.