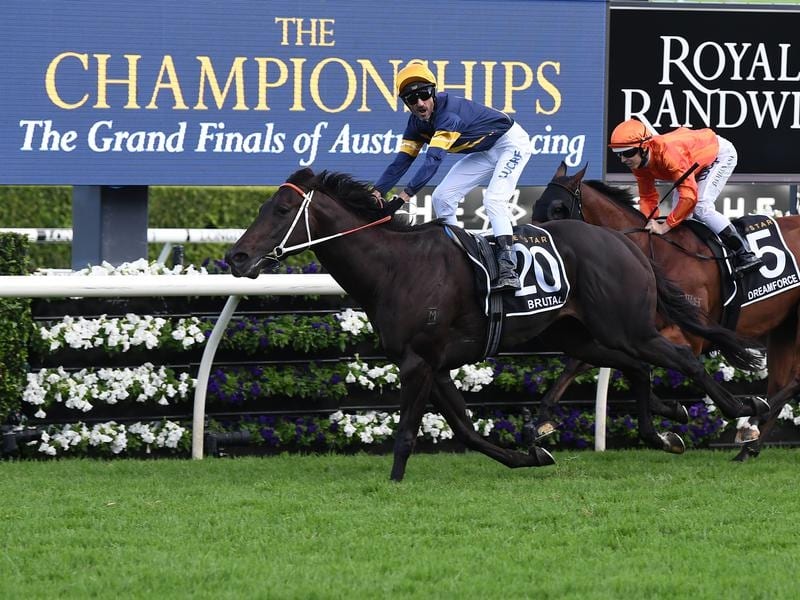 Doncaster Mile winner Brutal is primed to kick off his Golden Eagle campaign in the Premiere Stakes.

Doncaster Mile winner Brutal makes his highly anticipated spring return in the Premiere Stakes at Randwick and he is not there to make up the numbers.

The Hawkes Racing four-year-old takes on Classique Legend, one of the top fancies for the $14 million Everest, and Osborne Bulls who will be out to stake his claims for Godolphin’s vacant Everest slot.

Michael Hawkes, who trains Brutal in partnership with his father John and brother Wayne, is bullish about the four-year-old’s chances and says the horse’s class will carry him a long way on Saturday.

“It’s a handy field and they’ve probably got the fitness edge on their side, but we’ve got the class on ours and it’s amazing what class can do,” Hawkes said.

“Cream always rises to the top.”

Brutal has not raced since his Doncaster triumph, his trainers happy to give him the time he needed to recover from a slight head cold as they gear him towards the $7.5 million Golden Eagle (1500m) at Randwick in November.

With weight-for-age options for longer course sprinters sparse in the early part of the carnival, Hawkes says kicking Brutal off any earlier than the Premiere Stakes would have been detrimental.

“You go back to the Missile which was two months ago, it’s a long time between drinks for the two weight-for-age 1200 metre races,” Hawkes said.

“We were in the same boat every year with Chautauqua, they don’t cater for sprinters, they never have.

“You run in the Missile two months ago then you’ve got to stay up all spring.

“He’ll have three runs into the Eagle, less is more, and as long as he’s cherry-ripe for the Eagle we’ll be happy.”