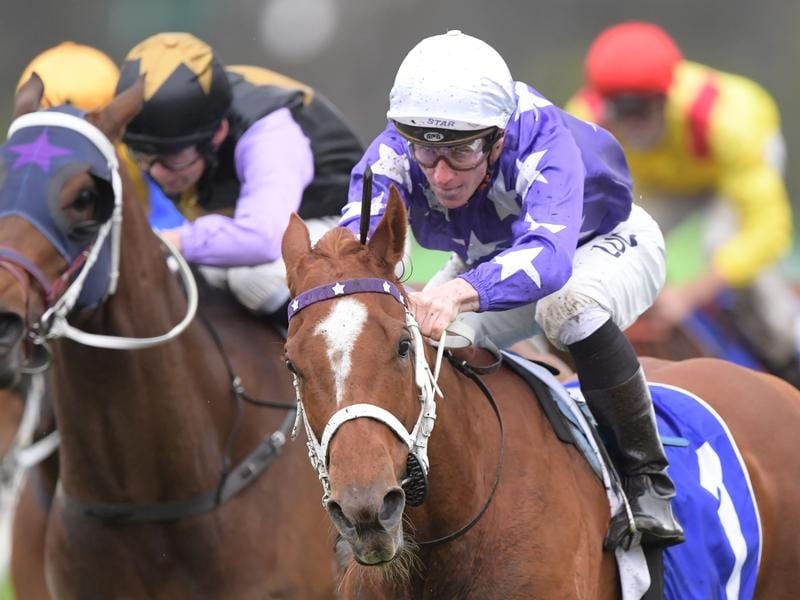 Velocita (r) has a strange walking action but it does not stop her when it comes to racing.

Mounting yard watchers would recognise Velocita as the horse with the strange leg action but for connections, her exaggerated gait is just part of her uniqueness.

The mare suffers from a condition known as Stringhalt, which causes the sudden flexion of one or both hind legs when a horse is walking.

It looks a little like one of her legs is tiptoeing but fortunately, has no bearing on her action or performance when she gallops.

The cause of the condition is a mystery but owner, Star Thoroughbreds’ Denise Martin, says there is a theory it can be triggered by horses eating from a certain type of pasture and Velocita only became affected following her two-year-old year.

As a $5 chance, Velocita shares the third line of betting for Saturday’s Book Spring Hospitality Handicap (1400m) on Randwick’s Kensington track program and should be nearing peak fitness following two runs from a break which have yielded a second to smart filly Notation and last-start sixth to the in-form Bangkok.

Two of her three wins have been over the distance of Saturday’s race and with top jockey James McDonald in the saddle, Martin expects a bold showing.

“She’s very well placed. James will give her every opportunity and she’s a good chance,” Martin said.

Her toughest opposition is expected to come from Helga, who is unbeaten in two starts in midweek grade this campaign, and consistent mares Connemarra and Wimlah.