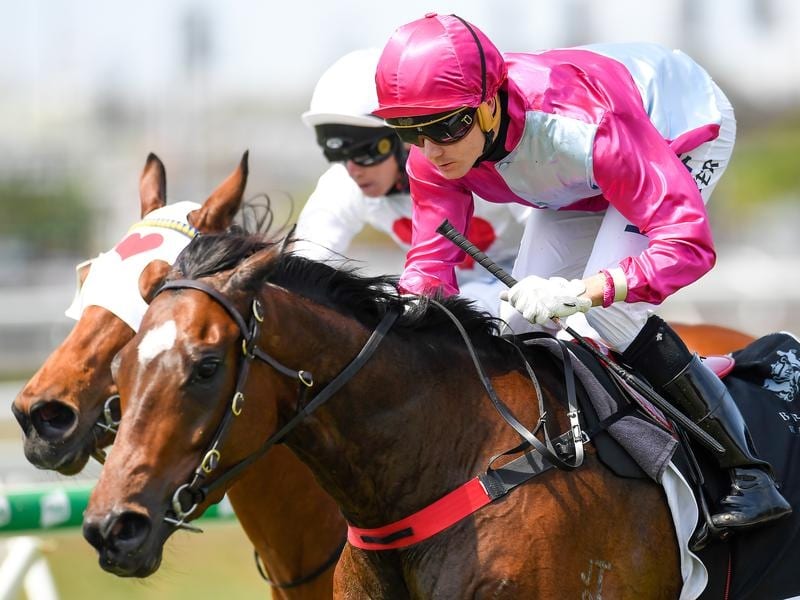 Baccarat Baby will be first-up since the Melbourne spring carnival when she races at Doomben.

Trainer David Vandyke is taking the glass half-full approach to the future for Baccarat Baby who resumes at Doomben.

Baccarat Baby will be having her first run since the Melbourne spring carnival in Saturday’s Racecourse Village Open Handicap (1200m).

In normal times the mare would be on the way to a winter carnival campaign but that is up in the air with the restrictions prompted by the coronavirus pandemic.

Queensland has been split into racing zones with the south east further divided into a further two regions while the winter carnival has been scrapped.

Racing Queensland is looking at options for a scaled down carnival later in the year or at least some bigger prize money races.

Caloundra-based Vandyke said he was like all trainers and waiting to see what RQ proposed before he made any decisions.

“I suppose we are all dressed up with nowhere to go at the moment,” Vandyke said.

“But I want to make it clear I am not whingeing. There are a lot of people out of work and I still have a job.

“The thing is we are racing and we have to ensure that continues.”

Baccarat Baby was far from disgraced in the Melbourne spring finishing fifth to top mare Melody Belle in the Group One Empire Rose Stakes at her most recent start.

She had earlier shown she was up to Group One class when beaten three-quarters of a length in fifth place behind Oohood in the Flight Stakes at Randwick the previous year.

Baccarat Baby counts two stakes victories in her overall eight-win tally which makes her among the better older mares in Queensland.

Vandyke has given Baccarat Baby one trial in the lead-up to Saturday when she finished fourth at the Sunshine Coast.

“The trial was just OK. But after Saturday we will see where she is at and build a campaign after that,” Vandyke said.

“She has won twice first-up so she is usually a good first-up horse.”

Baccarat Baby has top weight of 60kg on Saturday but Vandyke has resisted the temptation to use an apprentice.

Senior rider Michael Hellyer, who has won seven races on the mare, will again partner her.

“Michael loves her and gets the best out of her,” Vandyke said.

Star stablemate Alligator Blood is in the spelling paddock with connections still awaiting the results of tests on the B sample taken from the gelding after his Magic Millions Guineas win in January.

The first sample was found to contain altrenogest, a substance which can only be used on fillies and mares.

Managing owner Alan Endresz said on Twitter earlier this week, swabs from Alligator Blood’s Melbourne races, including his win in the Group One Australian Guineas, had been cleared and prize money paid.