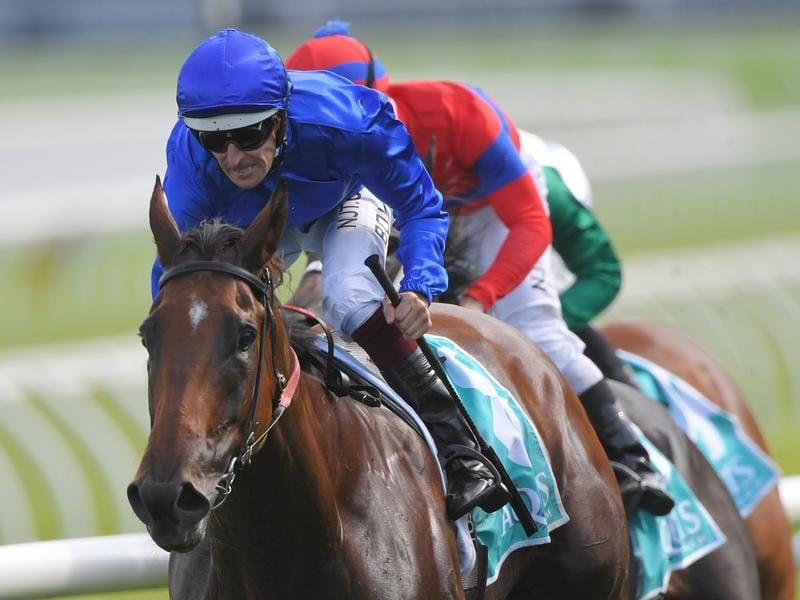 Godolphin mare Alizee is set to bow out of racing when she contests the Coolmore Legacy Stakes.

Grand mare Alizee will attempt to turn back the clock when she goes to the races for the final time.

The five-year-old will be retired after Saturday’s Coolmore Legacy Stakes for fillies and mares at Randwick, a race appropriately registered as the Queen of the Turf.

A triple Group One winner, Alizee will be reunited with Glyn Schofield who has not ridden her since they combined to claim the 1600m-race two years ago.

Schofield will have his work cut out with Alizee to jump from the second-widest barrier in the 17-horse field while stablemate Pohutukawa fared just one spot better.

Trainer James Cummings said Alizee deserved all the plaudits that came her way.

“She is a remarkable mare,” Cummings said.

“I feel privileged every time I put a saddle on her big, broad back.

“She is a mountain of a mare and if the track is no worse than a (soft) seven it would be a great way to see her out.

“She’s won at least one race in every preparation since she turned three, and she’s beaten a lot of very good horses along the way, including in this campaign in the Apollo where she beat Dreamforce and Happy Clapper.”

“If her career hadn’t been interrupted by a setback in the spring of 2018, who knows what her record would look like.”

Alizee had three starts as a juvenile with her best performance second to subsequent Golden Slipper placegetter Tulip in the 2017 Group Two Magic Night Stakes.

She came into her own as a spring three-year-old with wins in the Group Two Tea Rose Stakes and Group One Flight Stakes before her third in the Thousand Guineas.

The following autumn she capped her campaign by winning the Queen of the Turf.

Alizee missed the spring as a four-year-old after suffering a bleeding attack at trackwork and incurring a three-month ban.

Cummings got her back for the summer of 2018/19 and she won her first three starts including the Group One Futurity Stakes.

Along with the wide barrier on Saturday, Alizee has to contend with a high-quality field which includes star filly Funstar who was the TAB’s $2.90 favourite on Thursday.

The Chris Waller-trained Funstar is the only three-year-old in the race and has a 2.5kg advantage over her older rivals.

Funstar’s closest market rival is last Saturday’s surprise Doncaster Mile winner Nettoyer who is at $9 compared to the $41 she started at on the first day of The Championships.

The Bjorn Baker-trained Positive Peace is a $10 chance to rack up her sixth consecutive win.

The four-year-old earned her chance at Group One level after stepping up to Group Two company for the first time to win the Emancipation Stakes last Saturday week.

Alizee and Melbourne mare Miss Siska are at $12 while Pohutukawa is at $15 and will have blinkers reapplied after her ninth in the Emancipation.