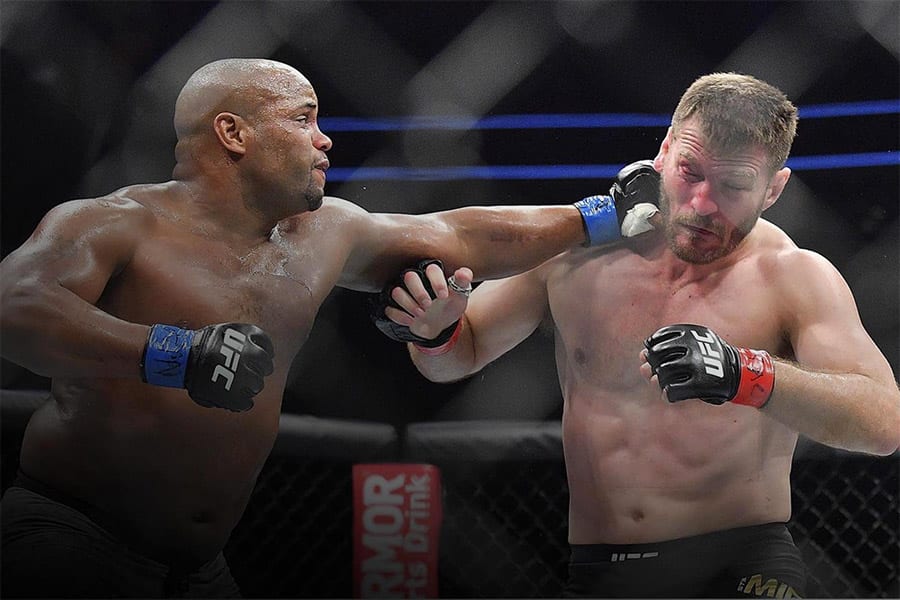 UFC 241 will showcase two of the world’s best heavyweight fighters going head-to-head, a comeback that has been three years in the making and a handful of other must-see fights.

Five huge fights will take place in the octagon at the Honda Centre on Sunday, August 18 (AEST) and the match-ups are all unmissable.

The UFC 241 Main Event features Daniel Cormier and Stipe Miocic, who last locked horns in July 2018. This rematch will determine who becomes the UFC Heavyweight Champion.

The welterweight clash between Anthony Pettis and Nate Diaz shares top billing and will be one to keep an eye on, as Diaz’s unpredictable nature will shape the fight.

The next three matches will be between Yoel Romero and Paulo Costa, Gabriel Benitez and Sodiq Yusuff, and Derek Brunson and Ian Heinisch.

Here is our UFC 241 preview, featuring odds and predictions for all five fights on the main card.

These fighters met in the octagon just over a year ago, with Cormier taking the victory in style in the first round when he landed a short right hand.

Cormier is yet to lose a fight at the heavyweight level, with an impressive 15-0 record, but that doesn’t rule out Miocic, who has been studying vision and formulating the perfect plan to take down his enemy.

Although Miocic was able to land plenty of hits in the first bout, he was never able to conjure anything powerful enough to startle Cormier, who was able to dodge and parry his way out of trouble.

Cormier has speed and sharp combinations despite his size, which makes him a very difficult opponent to face.

If Miocic can work his way around the octagon enough to get into a clinch, he may find a way to pin Cormier and get the upper hand.

Prediction: Daniel Cormier to win @ $1.71 with Sportsbet
The American fighter from Louisiana has won 15 straight heavyweight matches for a reason, as he has the skill and size to overcome anything that gets thrown at him. The price of $1.71 for Cormier to win is very healthy, but the $5.50 for him to win by points is another option.

Diaz returns to the cage as an underdog, with his last fight being the 2016 defeat to Conor McGregor.

Diaz has been priced as a $2.07 outsider against Pettis, who enjoyed a comfortable victory at UFC 219 in March when he defeated Stephen Thompson.

Prediction: Nate Diaz to win @ $2.07 with Sportsbet
While Diaz has been out of the octagon for almost three years, he is still only 34 and has plenty of experience behind him, which combined with his good shape makes for an upset. Take the $2.07 with confidence.

Romero has not entered the cage since he narrowly lost to Robert Whittaker back in UFC 225.

Similarly, Costa has not fought since UFC 226, where he was able to extend his record to 12-0.

Costa is a powerful 28-year-old Brazilian fighter that ends fights early, while Romero is a much more experienced fighter that will try to inject as much class as he can into the clash.

Prediction: Paulo Costa to win @ $2.25 with Sportsbet
Costa to win at $2.25 is a very good upset to take, as his youth and power will overwhelm the older Romero.

Yusuff has won both of his two matches since entering the UFC environment, which can be attributed to his fundamentals and sporting prowess.

A good sportsman always knows what he or she does best, and it appears that Yusuff has this quality and uses it to defeat his opponents.

Benitez was a contestant on the reality show The Ultimate Fighter and has a 5-2 record.

Prediction: Sodiq Yusuff to win @ $1.30 with Sportsbet
This match appears to be a good opportunity for Sodiq to dominate. Priced at $1.30, Yusuff will strut his stuff on the big stage and win this fight within the first two rounds.

Brunson was unable to win a fight in 2018 and has started to fade away from UFC altogether, whilst Heinisch is a man on the rise.

Heinisch has won five straight fights and will extend his streak to six if he can topple Brunson.