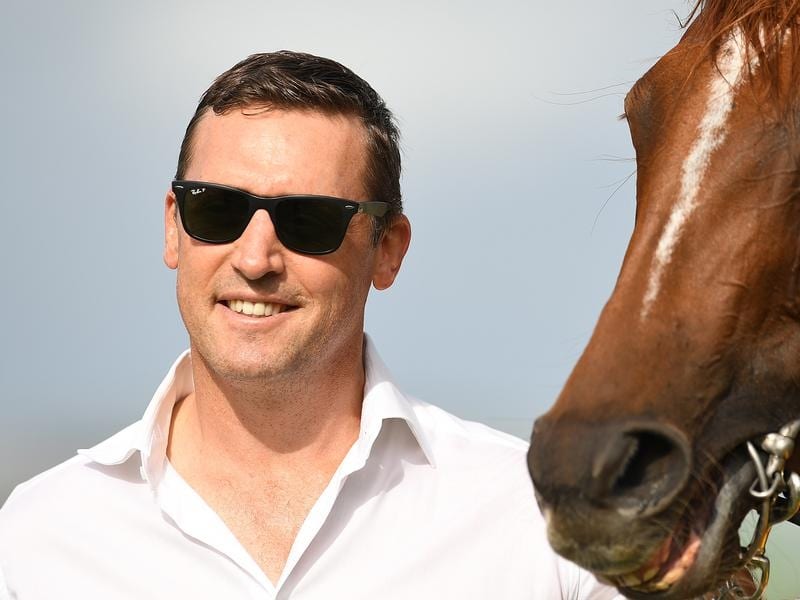 Trainer Tony Gollan will be after a rare double at Eagle Farm with siblings Silvera and High Wind.

Trainer Tony Gollan will have several promising young horses at Eagle Farm but will be hoping to produce a rare double with two of his old stagers.

Gollan has a sixth Brisbane metropolitan trainers title safely in his care and will be chasing his 12th feature race win of the season with Silvera (Tattersall’s Mile) and High Wind (Des Lambert Memorial).

Silvera and High Wind are three-quarter brothers, bred and raced by one of Gollan’s biggest owners, Linda Huddy.

It is rare for close relatives to score a double at a metropolitan meeting but Silvera and High Wind have genuine claims.

Linda and her husband Graham Huddy bought Pentamerous after they won an Australian Derby with the mare’s son Shoot Out.

High Wind is a full brother to Shoot Out as both are by High Chaparral.

Pentamerous, who is based at the Huddy’s Peachester Lodge north of Brisbane, has also produced the stakes winning mare I’m A Princess.

The Huddys also have two daughters of Pentamerous by Ferocity who they sent to High Chapparal.

One of those mares, Silver Tiara, has produced Silvera who won the Morphettville Guineas when trained by Tony McEvoy.

Silvera has been transferred to Gollan this winter and he took the gelding to Rockhampton to win the $150,000 Cup.

Gollan decided to bring Silvera back to Brisbane for the Tattersall’s Mile, a race he thinks is perfect for the gelding.

“There was an option to chase a bonus for the northern Cups but I felt he was much better suited in Brisbane at 1600 metres and with a light weight,” Gollan said.

“He is a tough horse and used to travel so the trip away was no worry.”

Gollan had considered retiring High Wind to become a show horse after he also won at the Rockhampton carnival but has decided to press on with him.

“We also nominated him for the Queensland Cup but the Lambart looks a nice race for him and he is nice and fit,” Gollan said.

Gollan has nine runners on Saturday including the promising Knight Mariner (QTIS 2YO) and filly Hollaback Girl (QTIS 3YO).

“He is bred to be a nice stayer and I am looking forward to getting him out to 1500 metres on Saturday,” Gollan said.

Hollaback Girl has had a few issues since she won a maiden by four lengths at Doomben in September.

Gollan took her Rockhampton for the carnival but scratched her because of a heavy track.

“She won a trial at Doomben last month and we are looking forward to her return to racing,” Gollan said.