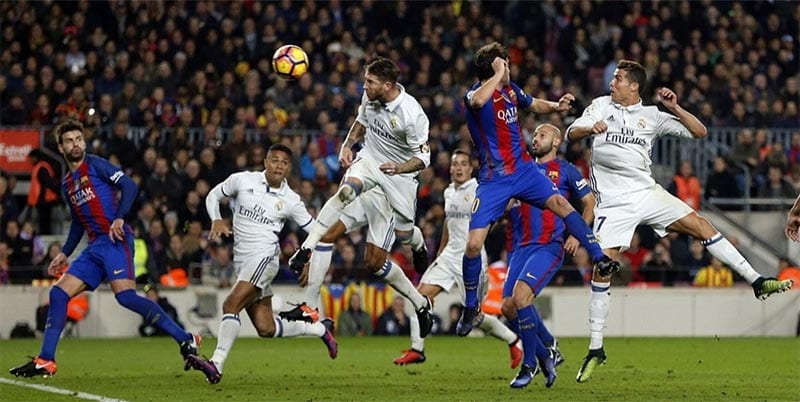 NO matter the sport, no matter the stakes, there is something extra special about a derby date.

Proximity, class divides and bitter, decades-long feuds always seem to add a unique and local spice that is sometimes lacking in other major rivalries.

With West Coast and Fremantle set to face off for the 45th time in the AFL this weekend, we could not help but wonder as to where the ‘Battle of the West’ ranks among the world’s great sporting rivalries.

Here are 10 of the biggest and best neighbourhood street-fights in world sport, starting with the most glamorous of them all.

There is no bigger derby than the one they call ‘El Clasico’.

It covers all the bases: two of the richest and best-supported clubs on the planet; the two most successful teams in the Spanish Primera Division; playing rosters that boast the biggest and most expensive names in football; and a political divide that stretches back to the fascist days of Franco.

Then there is the infamous Alfredo di Stefano transfer, the Luis Figo controversy, Lionel Messi vs. Cristiano Ronaldo – we could go on for days.

While Scottish football is not even in the same universe as Europe’s top leagues these days, the Old Firm derby remains one of the biggest and most brutal rivalries going around.

The religious and political schism between Catholic, working-class Celtic and Protestant, conservative Rangers made Glasgow the world capital of sectarian fan violence throughout much of the 20th century.

Things are calmer on that front these days, but the on-field battles at Ibrox and Parkhead are still as heated and attritional as ever.

The two biggest clubs in Buenos Aires also happen to be the most successful in football-mad Argentina.

Throw in a class gap between blue-collar Boca and upper-crust River, stir in some signature South American passion and watch as mayhem unfolds – not always for the better, as 71 poor souls found out in the 1968 El Monumental tragedy.

The ‘Superclasico’ combines the ferocity of the Glasgow derby with the flair of Barca vs. Madrid, which is why many football writers insist it is the greatest derby of them all.

State of Origin rugby league does not have quite the same historical depth as other match-ups on this list.

But since its inauguration in 1982, the annual three-game series between the neighbouring states of NSW and Queensland has grown to become what many consider the most significant event on the Australian sporting calendar.

Big hits, massive brawls and fierce sledging both on and off the field have captured the imagination of not only Blues and Maroons diehards, but the wider Aussie community – even those who prefer AFL to NRL.

Just about any sporting clash involving teams from these grand old north-eastern United States metropolises would be worthy of a spot on this list, but the Red Sox and the Yankees have a special relationship dating back to 1919.

That was the year Boston’s owner, Harry Frazee, opted to sell a talented left-arm pitcher and promising pinch-hitter to New York in order to fund a series of broadway musical projects.

Babe Ruth went on to star in four World Series wins for the Yankees while the Red Sox, who had won three titles in four years with the ‘Bambino’, had to wait 86 years between drinks.

Ohio State vs. University of Michigan

Outside the USA, the idea of two school teams fighting it out for bragging rights conjures memories of muddy shorts, ill-fitting footy boots and quarter-cut oranges on a Friday afternoon.

It is an entirely different story for the student-athletes at Ohio State and the University of Michigan, who are locked in a perpetual grudge-match dating back to 1897.

Nowhere is that feud more bitter, more celebrated and more spectacular than in college football, where the Buckeyes and the Wolverines clash in front of crowds exceeding 100,000 every year.

English soccer is full of great derbies, and many would say clashes such as Arsenal vs. Tottenham and Newcastle vs. Sunderland are stiff to miss our top 10.

But none, not even the Merseyside derby or the Manchester derby, stand out on the Premier League fixture list quite like any date between Liverpool and Man United.

They are England’s two most decorated clubs, each hailing from north-western cities of close proximity but contrasting nature, and their tussles down the years are imbued with a fierce animosity between fans, players and even managers.

While the trans-Tasman rivalry is only just beginning to blossom in cricket and some other sports, it has dominated the rugby union world for decades.

The Wallabies and the All Blacks have traded blows year after year since 1932, when Australia ran out 22-17 winners at the Sydney Cricket Ground in the inaugural Bledisloe Cup tie.

The Kiwis have rather wrested back the advantage since, however, claiming 44 series victories to the Aussies’ 12.

Australian rules football is rich with rivalry, from the traditional Melbourne bouts to newer fixtures such as the Adelaide Showdown, the West Australian derby and Sydney’s Battle of the Bridge.

Picking just one is no simple task, but it is impossible to overlook the old VFL blood feud between Collingwood and Carlton.

Situated in neighbouring Melbourne suburbs of contrasting demographics and economic fortunes, the Magpies and the Blues have fought in six grand finals and given Aussie footy fans some of the most memorable moments in the sport’s history.

It is hard to beat a grudge between two countries that used to be one, especially when nuclear missiles are involved.

In decades past, India and Pakistan’s clashes on the cricket field were but an extension of the religious, political and territorial conflict that has kept them locked in a perpetual border war since the 1940s.

But the beautiful thing about this unique international derby is the central role that sport – the common obsession that unites Indians and Pakistanis – has played in easing tensions, healing wounds and mending relationships that once seemed unsalvageable.