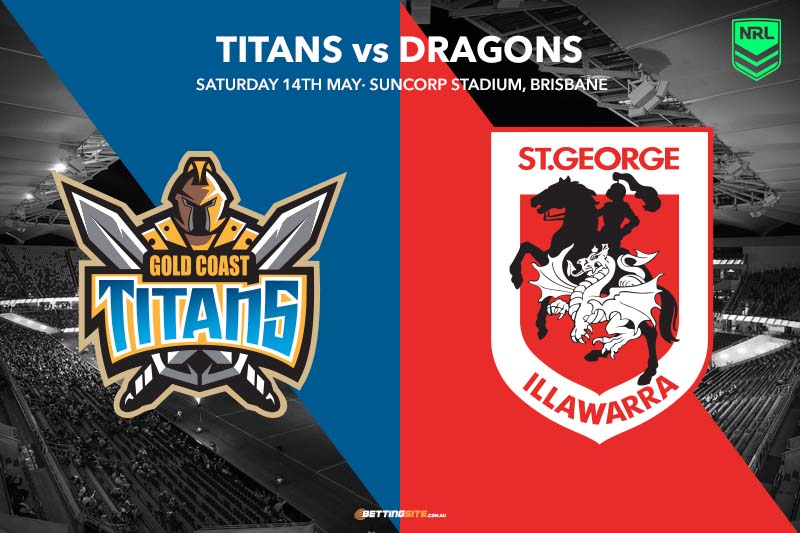 Both the Gold Coast Titans and St George-Illawarra Dragons suffered heavy defeats in Round Nine and will come into their NRL Magic Round clash with not even a struck match between them.

The top bookmakers can’t split them at $1.90 in the head-to-head market, as well as the skinny handicap line of just 1.5 points either way.

The further you look at the form of the Gold Coast Titans in 2022 the more you think they should blow out the longer the week goes.

They’ve lost three games in a row at the 13 plus margin and once the Roosters flexed their muscles after a slow start, they withered away like fresh fruit in the hot sun.

They have a tendancy like the Knights that if everything doesn’t go perfectly from kick-off they’ll take the soft option and go through the motions. Winning is nice if it happens but they give the appearance unless they have to bust their guts for it, they aren’t willing to lay it on the line.

It makes them impossible to back in this game, even with the benefit of it essentially being a home game and their opposition travelling interstate twice in seven days.

Even the Titans backline has become stale in recent weeks when you could rely on them to be a little frisky and give punters plenty of try scoring options.

With that said, Greg Marzhew might be the best pick on the left-wing to throw in a same game multi.

Brian Kelly inside him has moments where he can draw attention from the defence and Marzhew won’t need much space to push his way over the line given his skills as a powerful ball runner. Mikaele Ravalawa can be caught in two minds when he rushes in for the big shot and that will be Marzhew’s best way to the line.

The St George Illawarra Dragons should be the favourites for this game even if they were flogged by the Storm a week ago.

Newsflash. Everyone who is a middling NRL team gets flogged by the Storm, so read more into their three-game win streak before that.

What they did well in wins over the Roosters, Tigers and Knights was their ability to find ways to win in scrappy games.

Why that matters is they’re the opposite to the Titans in they’re prepared to stick to the task at hand for much longer when things get uncomfortable.

Purely on that alone, taking the $2.95 for the Dragons to win by 1-12 points appears to be the smart play.

The best try scoring options for them will be Moses Suli on the left-side and Mikaele Ravalawa on the right.

Suli is a handful every time he gets the ball and he will no doubt give Patrick Herbert plenty to think about.

Ravalawa hasn’t scored since Round One when he had a hat-trick, so it might be surprising to see him as a good option.

His price will be as good as a winger will get having not crossed in almost two months, and his career strike rate will tell you he gets across the stripe two out of every three weeks.

There isn’t a ton of star power in this match up, but Patrick Herbert and Moses Suli have it in them to have a good old-fashioned centre battle. Both pride themselves on their upper body strength, but they are used a little differently by their respective sides.

Herbert is a great attacking option when the Titans are trying to go wide early in sets to move the ball off their own end, while Suli is very much in his own once the Dragons cross half way.

The left-edge for both teams is where you’ll see a bulk of the action on Saturday evening.

The Dragons win at the 1-12 point margin. The Titans will start to loosen up once the Dragons get a good distance ahead and the score line will make it look like the Gold Coast were a lot closer than they actually were.