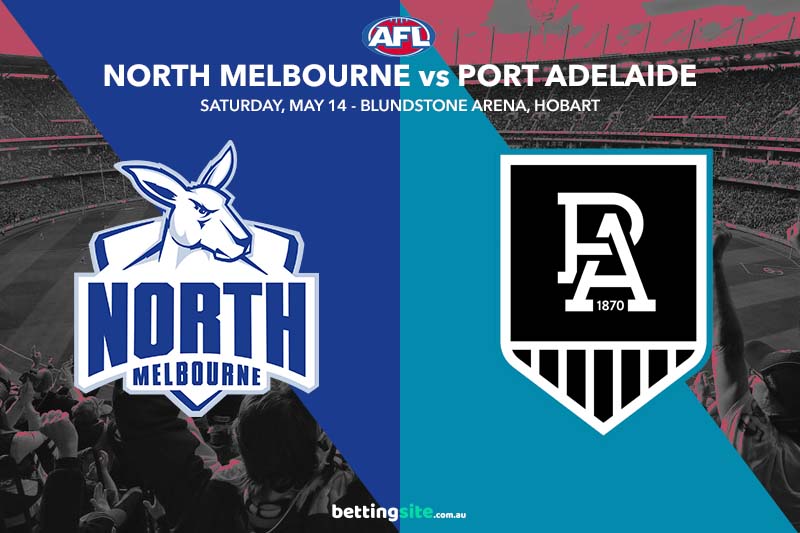 The Port Adelaide Power are back on track after winning their last three AFL matches consecutively, but can they make it four on the trot against North Melbourne down in Tasmania this Saturday?

David Noble’s Kangaroos play some of their best football at their home away from home at Blundstone Arena, which they need to bring this weekend after a tumultuous month of criticism.

The last four losing margins for the North Melbourne Kangaroos have all exceeded 50 points, while their most recent 78-point defeat against the Dockers was the worst of the lot.

Ken Hinkley’s Men have put together a pair of impressive wins in the last fortnight, overcoming the red-hot Saints by one point and the 2021 Runners Up by 17-points in round eight.

Riley Bonner was putting together some decent footy for the Power this year, but he has been ruled out for the next four weeks after spraining his ankle last weekend.

Port Adelaide Power key forward Charlie Dixon is a chance to play his first game of the season this week, which comes at a time when North Melbourne is very vulnerable.

The Roos will lose a defensive pillar in Ben McKay after he injured his knee last week, but Nick Larkey will return from suspension to add some much-needed fire-power up forward.

Winning the ball out of the centre this week will be critical down in Hobart, as first-use out of the middle will be important in what is expected to be difficult conditions. Two tough midfielders who thrive at the contest are Luke Davies-Uniacke and Ollie Wines, who each love to extract the footy and win clearances.

Wines is a proven champion after taking home the Brownlow Medal last season, while LDU continues to improve with each passing week. Many pundits are asking for more from the North Melbourne midfielder, and we expect Davies-Uniacke to silence his critics with a big game in the middle.

North Melbourne Kangaroos +34.5
The conditions in Hobart will create a slower and less skilful contest, which will play into the hands of the Kangaroos given their highly-contested game style. We suspect the Roos will come out and hit the Power between the eyes from the first bounce, as the club will want to send a message to the media following what has been a very negative week. Todd Goldstein will have a huge advantage over young Sam Hayes in the ruck, provide North a very handy advantage in the middle.

Sam Powell-Pepper 2+ goals
The 2022 season has been one to remember for Sam Powell-Pepper, who is playing some very attractive football for the Power in a hybrid mid-forward role. SPP has already kicked nine goals so far this year, which has him on track to kick a career-high over the course of the season. The powerful forward has kicked multiple goals in three matches this year and should hit that mark again this weekend.
Sam Powell-Pepper 2+ goals @ $2.35 with Ladbrokes

Have some faith in the Kangaroos to hold the line this Saturday on their home deck, where Luke Davies-Uniacke will thrive out of the middle and Sam Powell-Pepper will be a lively target up forward.