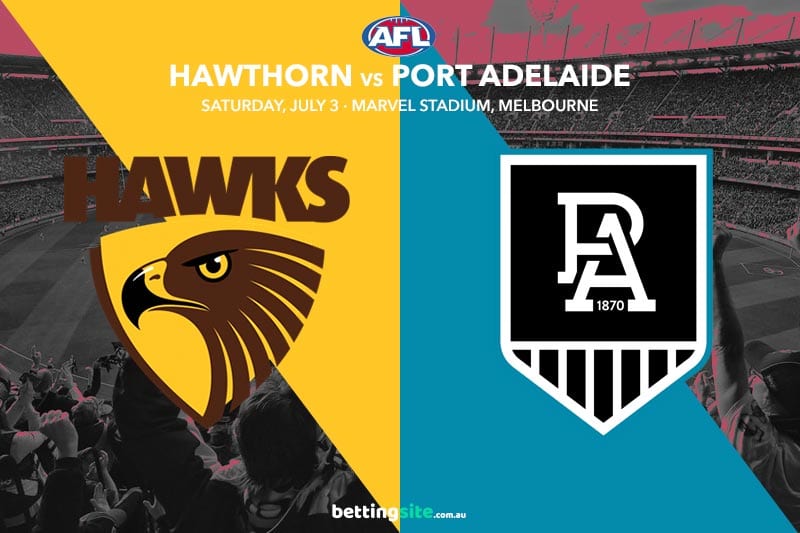 Shaun Burgoyne will bring up his 400th AFL game against his old side this Saturday night when the Hawthorn Hawks host the Port Adelaide Power at Marvel Stadium.

It has not been a season to remember for the Hawks, but their last three performances have been outstanding. If not for a narrow defeat to Essendon in round 14, they would be heading into this clash with three consecutive wins under their belt.

Alastair Clarkson’s men have another tough challenge this week, as the Power have won four of their last five outings. The only selection change for Port will revolve around the fitness of Trent McKenzie, who aggravated his shoulder against the Sydney Swans last week.

The Hawks will bring in Burgoyne after he started as the medical sub in round 15, while they lose Denver Grainger-Barras, who suffered a concussion on debut, and Chad Wingard is out with another hamstring complaint.

Both these teams have brought plenty of tall targets into their forward lines this season, but the young Hawthorn spearheads are not having the biggest impact. Luke Breust leads the Hawks’ goalkicking with 24 majors, while surprise package Dylan Moore is in second place with 20. Moore kicked four goals last week against the Giants and is always worth a look in the goalscorer markets at the top AFL betting sites.

Although the Power have struggled at times to match it with their rivals in the premiership race, they’ve been very strong against teams at the wrong end of the ladder. Ken Hinkley’s men have won all eight of their matches against sides outside the top eight, with their only others wins coming against Richmond in round four and Sydney last week.

When it comes to contested possessions and disposals, Tom Mitchell and Ollie Wines are the best players on their respective teams. Both midfielders lead their sides for disposals this season, each averaging over 30 touches per game.

Wines’ recent form has increased his stocks in the Brownlow Medal betting, while Mitchell is always a contender after winning the medal in 2018. Consider both stars this week in your multi bets, as they should each pass the 30-disposal mark at Marvel Stadium this Saturday.

The Hawks have defended very well since Will Day returned to the team after a long stint on the sidelines, but we still think the Power are going to outmuscle them and win this match. With Charlie Dixon, Mitch Georgiades and Todd Marshall up forward, Port Adelaide’s contested marking will overpower the Hawthorn defence.

Jacob Koschitzke and Tim O’Brien are not the most trustworthy forwards for the Hawks, but we think Dylan Moore is more than capable of hitting the scoreboard each week. The intelligent small forward is good at drawing free kicks and finishes well in front of the big sticks. Moore has kicked a goal in each of his last six matches and should slot multiple majors this Saturday.

The Power will be too strong for the Hawks this weekend as they claim an important victory at Marvel Stadium. Ollie Wines will keep his excellent form rolling in the middle, while Dylan Moore will do the same up forward for Hawthorn. These three legs combined will net you a $8.25 return with Sportsbet.