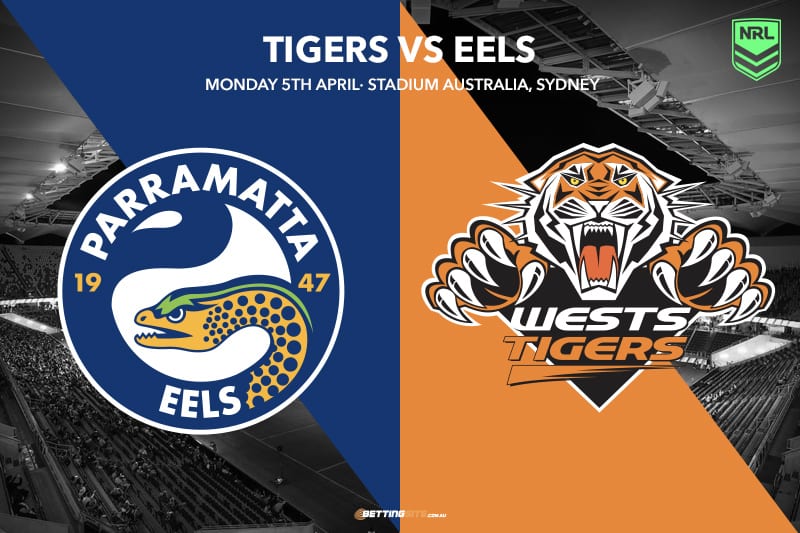 Wests Tigers and Parramatta will do battle in the traditional Easter Monday clash at Stadium Australia, after a year hiatus because of the covid-19 pandemic.

The Tigers got their first win of the season over Newcastle on Sunday, a thrilling 24-20 victory, but they may be without James Roberts who breached covid protocol by attending the Tim Tszyu fight on Wednesday.

Parramatta is one of just two teams who remain undefeated and will fancy their chances of a perfect month, making for a match. Ryan Matterson will return for the Eels after missing the last game with concussion, while the Tigers remain unchanged from their round three win.

He might have played just three games with his new club, but Daine Laurie already looks like the Tigers’ best player. Even in the opening fortnight when the Tigers were badly beaten, he showed flashes of brilliance and he looks like one of the rare buys Wests got right.

His opposite number Clint Gutherson is the Eels’ life source and the energy he provides is a big factor in how they perform on a weekly basis. The evolution to Laurie’s game will be continuing to produce effort on effort, but his class under the high ball and will-of-the-wisp style make for a fascinating match up. Both will feature heavily and don’t be shocked if both cross.

Adam Doueihi looked to be a big difference maker with a big performance against the Knights, giving them much more creativity, especially down the left flank. He will attempt to get makeshift centre Marata Nuikore to bite and make some poor defensive decisions, which brings Tommy Talau and Asu Kepaoa into the frame as try scoring options. Even though they got the upset last round, the +9.5 line suggests not many think they will repeat that effort.

Anytime you’re $8 to score the first try, you’re in world-class form and that feels like a fair assessment for Maika Sivo. But the sneaky pick we like as a first try option is Mitchell Moses. Remember the last time these two played on Easter Monday? Moses running 80 metres and scoring the first ever try at Bankwest which opened the floodgates for a 50-6 drubbing. Against his old club he might show up. The Eels haven’t blown teams away in any of their three wins, which brings the $3 for a 1-12 win right into the equation.

The Tigers showed last week they are capable of causing some headaches, and we think they will, they’ll just lose by 10 to the Eels who will move to 4-0 on the season.