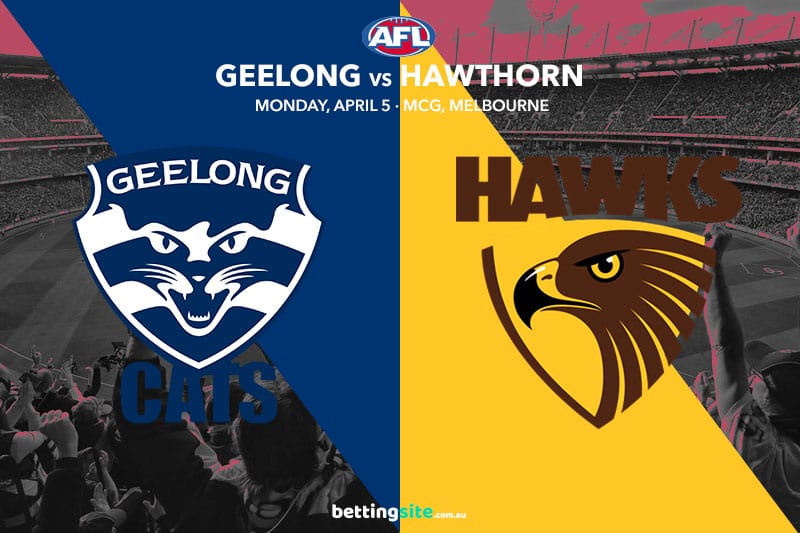 The traditional Easter Monday clash sees the Geelong Cats and Hawthorn Hawks reignite their massive rivalry at the MCG to close out round three of the 2021 AFL season.

It has not been a smooth start to the season for the Cats, who were beaten by the Adelaide Crows in round one and then just got over the line by one point against the Brisbane Lions.

Alastair Clarkson has already coached the Hawks to one brilliant victory this season, but it would take a big effort to get over the Cats without Jack Gunston in the Hawthorn forward-line.

Gary Rohan will miss this match after copping a two-week suspension for striking Lachie Neale last week, but Mitch Duncan and Sam Menegola will return to the Geelong midfield.

These two experienced midfielders should rack up plenty of the footy this Monday. Joel Selwood amassed 32 disposals against the Hawks in 2019, while Tom Mitchell averages over 30 touches across his last three clashes with the Cats. Both will be popular options in the prop markets at AFL betting sites this week.

With Gary Rohan suspended and Jeremy Cameron still nursing his hamstring injury, look to the other Geelong forwards to step up in front of goal. Gryan Miers and Francis Evans can be dangerous inside 50, so they will attract some attention in the goalscorer markets.

Chad Wingard will put his hand up for selection this week, which should provide a huge boost to their attacking output. The Hawks were poor going forward against the tight Richmond defence last round, which could become a problem again this week as they take on Geelong’s strong back six. Consider the possibility of another low-scoring game this Easter Monday.

Joel Selwood to get 30+ disposals

Without Patrick Dangerfield in the midfield, Joel Selwood found the footy 27 times in last week’s match with the Lions, and we think he will break the 30-disposal mark here. Selwood loves the matchup against the Hawks and has started the season in good form, so he should finish the game atop the disposal tally for Geelong.

Hawthorn +22.5
The Hawks only lost to Richmond by 29 points, and it should have been a much larger margin considering how badly they struggled going forward. With Chad Wingard coming back and bringing some much-needed class to the forward flank, they should go well in this blockbuster contest.

The Cats just got over the line in round two, but now that Gary Rohan is suspended, the list of missing players is starting to grow. Even though the Hawks will be without Will Day, who requires surgery on his injured ankle, we expect they will push Geelong to the final siren. Tim O’Brien has been good in front of goal in first two weeks and should snag a couple more on Monday.