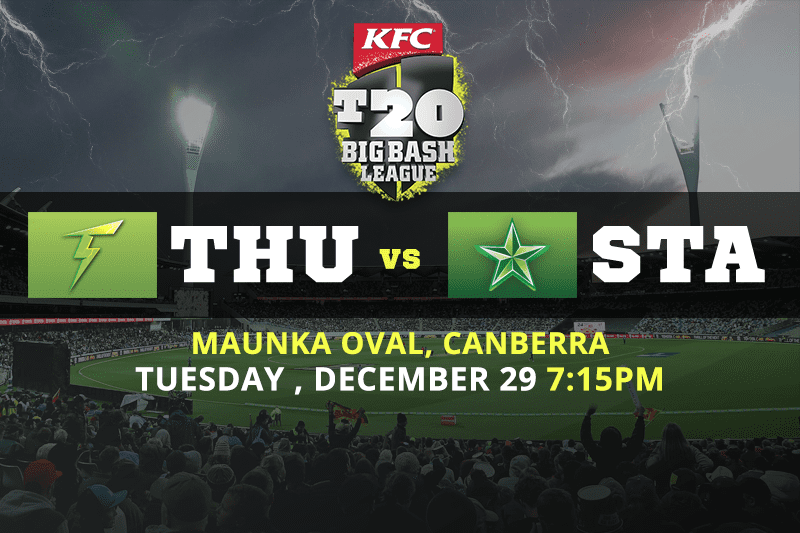 Can the Sydney Thunder tie BBL10 their record against the Melbourne Stars when they face off for the second time this season at Manuka Oval?

The Stars were too classy when they battled earlier in the season, having the ability to win while resting their top paceman Nathan Coulter-Nile.

Callum Ferguson’s Thunder are coming off a terrific match against the Renegades, where they put over 200 runs on the board before bowling out the ‘Gades for just 80.

Even though Nicholas Pooran and Glenn Maxwell went berserk with the bat, the Stars didn’t have enough power to defeat the Sydney Sixers in their previous game.

Marcus Stoinis should return this Tuesday after missing the critical game against the Sixers, where he was rested because of lingering minor injuries.

If you stayed up late to watch the Stars and Sixers game at Metricon Stadium, you witnessed some of the best hitting the BBL has to offer. Between Maxwell and Pooran, 13 sixes were hit, accounting for all but one of the team’s total. With Stoinis back in the squad alongside his powerful teammates, you can expect some massive shots to be played this Tuesday.

There aren’t many players that look as settled as Ferguson does at the crease, who simply controls the innings at his pace. Ferguson drives well and plays a smart game, staying alive and making sure the Thunder don’t collapse early. Besides one duck against the Brisbane Heat, Ferguson has been brilliant in BBL10, posting two half-centuries and a comfortable 31 in his most recent game.

Zampa is in the debate when it comes to the best spinners in the BBL, as his consistent turn and aggressive mindset make for a dangerous combination. Zampa has picked up four wickets across his last three games against the Thunder, including a pair in this season’s match not long ago. Even when batsmen target him, Zampa still finds a way to take a few wickets.

The untimely resting of Stoinis possibly cost the Stars a win against the Sydney Sixers, but there won’t be any mistakes when they face the Sydney Thunder. The Stars will need to look out for young gun Oliver Henry, but considering they bowl pace better than most sides, the Stars should manage against even the most experienced batsmen.