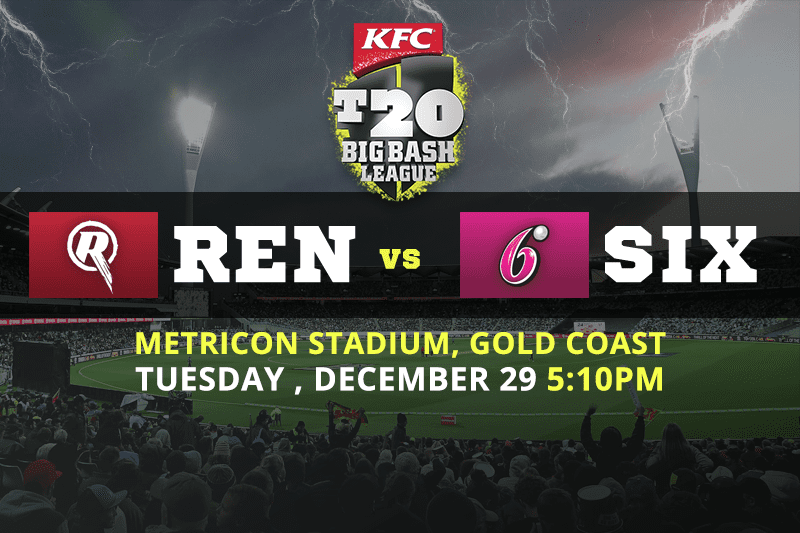 The first of a BBL10 double header on Tuesday night sees the out of sorts Melbourne Renegades ‘host’ the top of the table Sydney Sixers at Metricon Stadium. The Renegades were embarrassed by the Sydney Thunder in their last start effort, whilst a Daniel Hughes masterclass saw the Sixers come up victorious against the Melbourne Stars in the Grand Final rematch from BBL09.

If you were on the Renegades on Boxing Day, it must have been a hard watch from ball one, the Renegades never really looked to be in the contest against the Thunder and chasing over 200 in a Twenty20 is never an easy task. However, to be rolled for 80 and to lose by 129 is another thing in itself. We expect a spirited fightback from the ‘Gades on Tuesday night, but this is by no means an easy task.

When you are 2-5 chasing 194, not many teams can rebuild and chase it down. However, the Sixers managed to do that against the Stars on Saturday night at Metricon Stadium. Daniel Hughes put together a superb innings of 96 and with important contributions from their star all rounders Christian, Holder and Brathwaite the Sixers managed to get the job done in the final over.

As much as we are expecting the renegades to bounce back from that insipid showing, the Sixers still look too good for the Renegades on paper and we expect them to get the job done on Tuesday in impressive fashion. When the teams met just a fortnight ago the Sixers managed to put up a score of 205 after a Josh Phillipe masterclass at the top of the order. The Renegades on that night were skittled for 60 and it was another case of them never being in it. Based on that match and the Renegades last match, the Sixers should be winning this quite easily.

When the Sixers beat the Renegades in the 6th match of BBL10, Josh Phillipe made a 57 ball 95 in a fine display of top order batting. He looked to be going through the gears nicely on Boxing Day before trying to get too clever in reverse sweeping Adam Zampa straight to backward point. Phillipe will be looking to build on his start to BBL10 and we’re expecting him to go big here up at Metricon Stadium and set a platform for their star-studded middle order.

To Hit A Six – Shaun Marsh

For the Renegades to have any chance in this match, they will be needing plenty from their top class opening partnership between Marsh and Finch. Once regarded as one of the country’s best white ball cricketer’s, Shaun Marsh is yet to make an impact in BBL10, but on Tuesday night and the small boundaries at Metricon, we’re backing to clear the rope on at least one occasion.