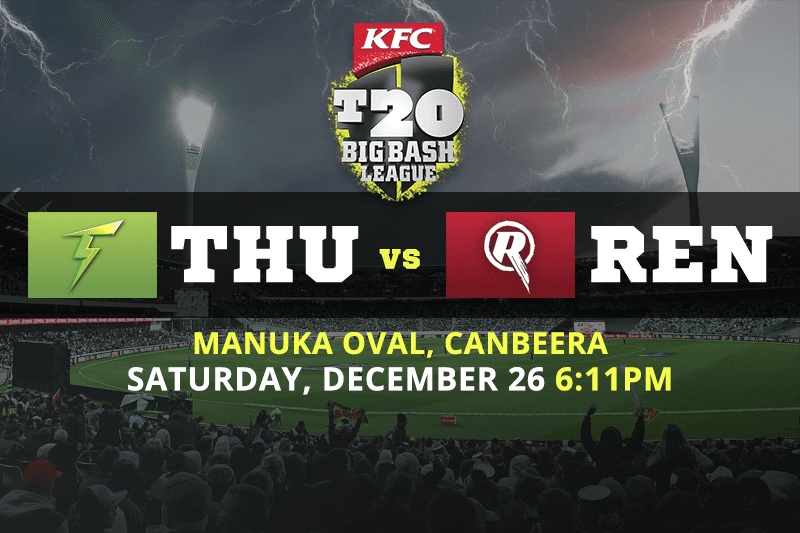 The first match of a BBL10 double header on Boxing Day sees the Sydney Thunder come up against the out of sorts Melbourne Renegades.

The green side of Sydney are coming off a professional victory over the Perth Scorchers on Tuesday night when Callum Ferguson and debutant.

Oliver Davies put on a masterclass when chasing a competitive score. Accompanied by the likes of Ben Cutting in an all round display and an economical spell from New Zealand speedster Adam Milne, the Thunder managed to get the job done by 7 wickets.

The story for the Melbourne Renegades is one that reads hard for ‘Gades fans. After their first up win against the Scorchers it’s been tough going culminating in a comprehensive defeat to the Hobart Hurricanes last Saturday.

It’s a must win matchup for the Renegades, but the Sydney Thunder will be incredibly hard to beat.

It’s remarkable to think that the Sydney Thunder go into this match against the Melbourne Renegades as underdogs. The Thunder seem to be clicking on all levels, and with a fit Adam Milne at their disposal now they now have the x-factor they’ve been searching for in their bowling lineup for some time. The Thunder also possess one of the best Top 3 batsmen with Khawaja, Hales and Ferguson and if one of them go huge here, the Thunder may just be out of reach for the Renegades.

As we were saying, the Thunder have an A Grade top order. However, the openers are yet to fire so far in BBL10 with opening partnerships of 21, 1 and 6 in their opening three games the Thunder will be looking for a strong foundation from Khawaja and Hales. It’s amazing to think they’re both in their countries Top 6 white ball batsman, but neither can get a run for their respective limited overs teams.

The former Australian T20 international all-rounder has begun the Big Bash in impressive style. Having split from the Brisbane Heat, Cutting was always going to add plenty of explosiveness to whichever team he ended up at. If the Thunder bat first, expect him to come in with four overs to go if the situation allows so, and we’re backing him to hit a few boundaries when doing so.