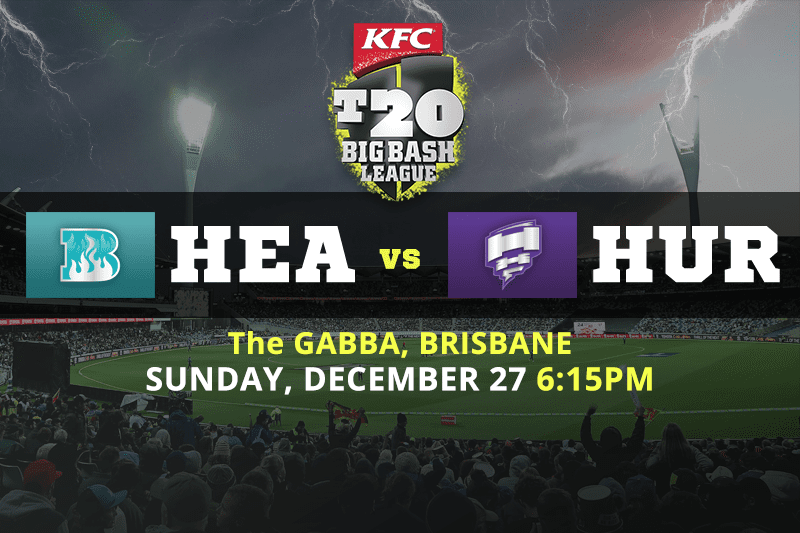 It is the bottom of the ladder Brisbane Heat who host the top of the ladder Hobart Hurricanes at the Gabba on Sunday night as the BBL10 frenzy continues. With the Brisbane Heat proving victorious over the Hurricanes in their previous two meetings, the men in purple will be hoping their impressive start to BBL10 can get them over the line in this matchup.

Brisbane are coming off a heartbreaking final ball loss to the Adelaide Strikers, after a masterful innings by stand-in captain Jimmy Pierson gave them a chance, after all hope seemed to be lost when chasing 151 against the Strikers on Wednesday night. After a superb bowling innings, the Heat found themselves 8-68 before Pierson put on 69 off 36 balls to pull them within a whisker of one of the greatest wins the Big Bash League has ever seen.

Hobart on the other hand could not have asked for much of a better start than what they have had to start BBL10. Coming off a superb 89 not out, Ben McDermott will be looking to continue his purple patch of form in white ball cricket and gets to do so on what usually is a batsman friendly deck at the Gabba.

A team that is 3-1 and has looked ultra impressive in the tournament so far, comes up against a team who is 0-3 and have never really looked like winning a game thus far. To add to the Brisbane Heat’s woes is the fact they are set to be without their inspirational captain Chris Lynn for this match and a few more to come after straining a hamstring in the warmup before the Strikers game. The Hurricanes look to have the Heat covered in most areas on paper, and look set to continue their impressive season.

He’s one of the best short form players in the country, but D’Arcy Short will want to be putting together some bigger numbers as we approach halfway of the Hurricanes BBL10 season. With scores of 0, 72, 2 and 1 it hardly reads as an impressive form line. However, he comes up against a Brisbane Heat attack who are one of the more inconsistent bowling attacks in the competition. We’re backing him to turn his form around in a big way on Sunday night, and if he gets through the first over or two, then watch out Heat bowlers!

Ben McDermott Number Of Sixes – Over 0.5

Having missed the first two games of the BBL10 season due to Australia A commitments, Ben McDermott has come back and reminded all white balls fans just how good he is in the shortest format. Fresh off a 55 ball 89* where he hit nine boundaries and five sixes, the keeper-batsman will look to continue that purple patch here. If he can come in when the shine is off the new ball, he looks set to go big yet again, and we’re hoping he can clear the ropes in the process.