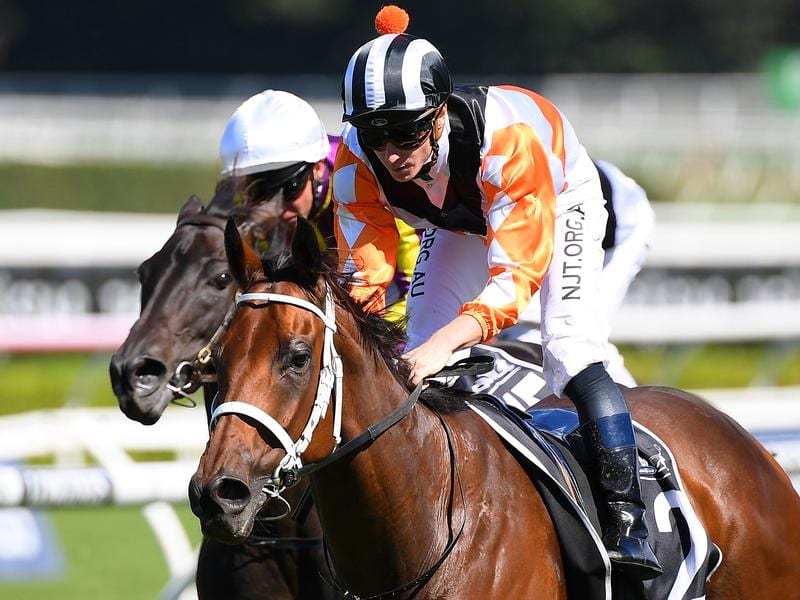 Bargain buy yearling Through The Cracks has won the Provincial Championships Final at Randwick.

Bargain-buy Through The Cracks has delivered Gosford trainer Angela Davies the thrill of a feature autumn carnival win at Randwick in the $400,000 Provincial Championships Final.

The five-year-old gelding, who was bought for $7500 as a yearling, powered away under star jockey James McDonald over the concluding stages in Saturday’s 1400m feature for NSW provincial-trained horses, giving Davies her biggest win as a trainer.

“It certainly is. What a great thrill it has been today,” Davies said.

“He just keeps improving the older he is getting. We had a slow start because he was immature but as he’s maturing he’s just getting better.”

Through The Cracks secured his spot in the Final when he finished second to Asharani in the Gosford Qualifier last month which was held at Newcastle.

Sent out the $6 equal favourite in Saturday’s field of 15, Through The Cracks only had four horses behind him approaching the home turn but overhauled his rivals with an impressive finishing sprint on the heavy track to beat the Tracey Bartley-trained Moana Jewel ($31) by 1-1/4-lengths.

The Kim Waugh-trained Oxford Tycoon ($12) was a nose away third.

“James said ‘I’d like to be midfield’ and I said ‘don’t go getting him out of his comfort zone’,” Davies said.

“I said ‘he’s got the best finish ever, you’ve just got to leave him alone and he’ll do the best thing for you at the end’.

“It got to about the 200 metres and I started yelling. It was great. What a great thrill.

“We’re such a small stable. We’ve only got eight horses in work. It’s such a thrill to just beat everybody else as a small trainer.”

Through The Cracks had already earned $130,000 prize money while first prize money for Saturday’s win, his sixth career victory from 13 starts, was another $216,000.

McDonald went into the race brimming with confidence after riding Through The Cracks in a recent Randwick trial and said the gelding had been perfectly trained for the big day.

He said he was rapt to be able to get the job done for the gelding’s connections.

“He put in a fantastic trial the other day and I said to Angela I thought they won’t beat him after that trial,” McDonald said.

“He just had so much improvement in him, he was turned out in brilliant order and he was well.

“It was a good performance.”