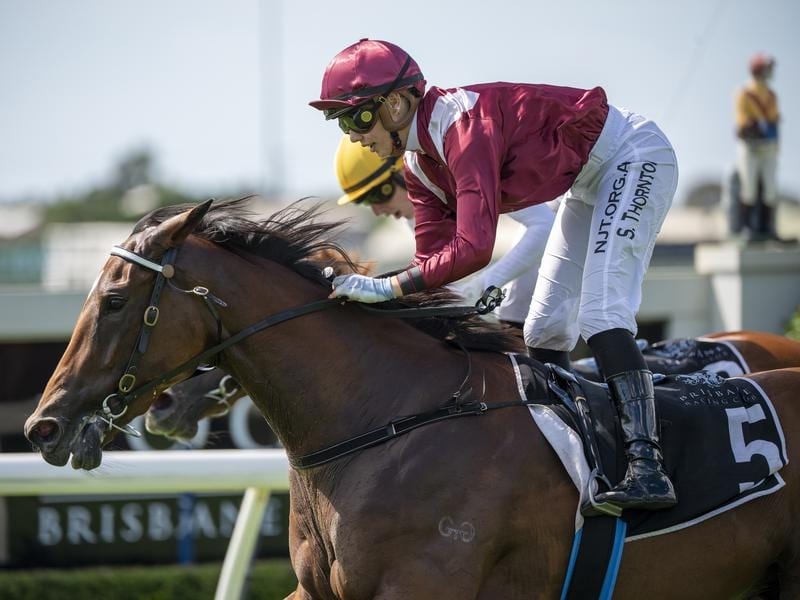 Minjee is headed towards a revamped Brisbane winter carnival after winning at Doomben.

Tough filly Minjee confirmed her winter claims when she scored a replica of her previous win over Snappy Reply at Doomben.

At Doomben two weeks ago Minjee came from near last to beat Snappy Reply on the line.

It was the same scenario on Saturday when Minjee ($6.50) stormed home from near last to beat Snappy Reply ($2.70) by a head in the Darryl Gollan Tribute Two-Year-Old (1200m).

Trainer Robbie Heathcote said Minjee was one of the most competitive fillies he had trained.

“She is a real warrior. She wants to win and she has a big motor,” he said.

“I have been saying since she won her trials that there isn’t much between her and my top two year old Rothfire.

“I want to congratulate Racing Queensland for putting on some stakes races in the winter to replace the carnival. That is where Minjee is heading.”

Heathcote said Minjee could tackle the Group One JJ Atkins which has been shortened to 1400m this year.

Michael Cahill rode Minjee at her previous start but due to regional racing caused by coronavirus could not take the mount.

He was replaced by apprentice Stephanie Thornton who rode a patient race.

“Steph is riding like Michael who doesn’t panic in his races,” Heathcote said.

The race was run at a breakneck pace early with Heathcote’s other runner Dusty Tycoon and Charlie Sphene contesting the lead.

“The times tell the tale. They went out in 34 and came home in 36. But Dusty Tycoon was stirred up before the race and she might be in season,” Heathcote said.

It was Heathcote’s 10th win in a metropolitan two-year-old race this season which his best effort in his two decades career.