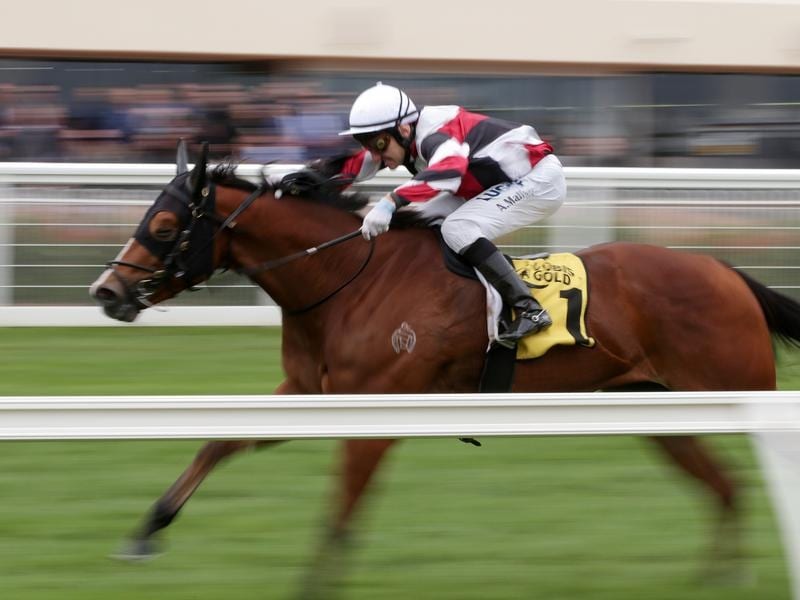 Progressive sprinter Halvorsen will back up at Flemington, seven days after his Caulfield win.

Talented sprinting prospect Halvorsen will race on a seven-day back-up at Flemington ahead of a possible interstate trip for a Group One sprint.

Halvorsen convincingly won the VOBIS Gold Dash (1100m) at Caulfield last Saturday and trainer Robbie Griffiths is planning to back the three-year-old up in Saturday’s Who Shot Thebarman Handicap for his first try on Flemington’s straight 1200m-course.

“There is an unknown about the straight racing, being his first run, but he’s had a light week of work and he seems fresh and well and feeling good,” Griffiths said.

“I’d like to think he will put in a good run again.”

Griffiths had also nominated Halvorsen for Saturday’s Group Two Euclase Stakes (1200m) in Adelaide but felt the trip combined with the quick back-up would be too much.

The Cranbourne trainer, however, has the Group One Goodwood (1200m) on May 18 in Adelaide in mind for Halvorsen although he is still unsure whether the gelding is mature and seasoned enough.

The Goodwood nominations close on Tuesday.

“I might look at the noms and say he is not up to them, but he’s a progressive young horse so I thought I would definitely leave that thought in my mind and see what the nominations are like and how it looks going into it,” Griffiths said.

“If The Goodwood looks too strong I’ll just follow the Creswick Series in Melbourne with him.”

Griffiths said Halvorsen had always shown talent but did a few things wrong as a younger horse.

“Now he is starting to relax and be strong at the end of his races,” he said.

“He put the writing on the wall when we set him for the VOBIS Gold Carat at The Valley in January and he beat Hawkshot who has since franked that form.

“I do think he has got a great future and it’s really starting to happen for him now.”

Griffiths has two-year-old filly Feign in Saturday’s Jack Styring Plate (1100m) at Flemington and three-year-old filly Fidelia who is favourite for the Rogan Josh Handicap (1410m) after winning over 1300m at Sandown last start.

“The way Fidelia needed that last little bit of the race to win last start you would think the extra 110 metres would be a bonus for her,” Griffiths said.

“From a good draw with Ethan Brown’s 1.5 kilo claim, you’d think she’s going to have to be a great chance again.”