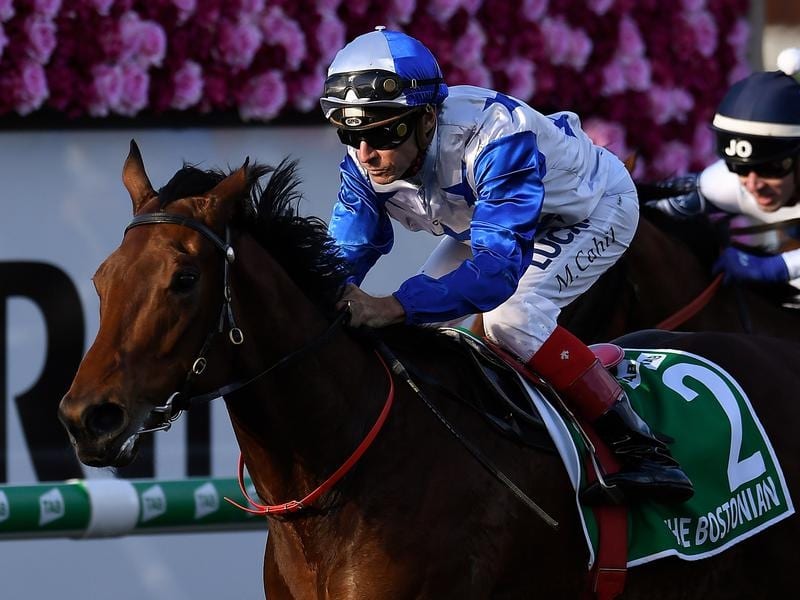 The Bostonian begins his latest Australian campaign in the $1 million Moir Stakes at The Valley.

New Zealand trainer Tony Pike does not believe he could have The Bostonian going any better ahead of the sprinter’s spring return in the $1 million Moir Stakes at The Valley, but would have liked a better barrier draw.

The Bostonian, who won two weight-for-age Group Ones in Brisbane in his previous preparation, begins his latest Australian campaign in Friday night’s 1000m sprint, with his rivals including fellow Group One winners Nature Strip, Sunlight, Trekking and Booker.

Pike would have preferred a softer draw than barrier 13 but will rely on star jockey Damian Lane to navigate and hopes the gelding closes strongly.

“Obviously any inside barrier would be gold, you would think,” Pike said.

“But it is what it is. It’s out of your control and it looks like they will run along pretty quickly in the race.

“We’ll leave it up to Damian. That’s what those boys get paid the big bucks for and hopefully he can get some cover somewhere in behind them.”

The Bostonian has settled in well since arriving in Melbourne and impressed Pike with his performance in a jump-out at Flemington last Friday.

“We left him up in Brisbane for a month last year and his coat went off and he probably didn’t come up as well as we were hoping last spring,” Pike said.

“But this year he is really going well.

“He couldn’t be going any better but he will obviously need to be going pretty well as well.”

The Moir is the first of a number of feature sprints for The Bostonian this spring, including the Schillaci Stakes on October 12 at Caulfield, where the winner will be offered the Melbourne Racing Club’s slot in the $14 million The Everest the following week.

The Valley 1000m course record holder Nature Strip has drawn barrier one in the Moir, with Eduardo in barrier two and Ball Of Muscle in gate three.

Multiple Group One winner Sunlight has barrier 10 and trainer Tony McEvoy believes that makes things tougher for the mare, who is second favourite at $6 behind Nature Strip ($2.70).

“All the speed is barriers one, two, three,” McEvoy said.