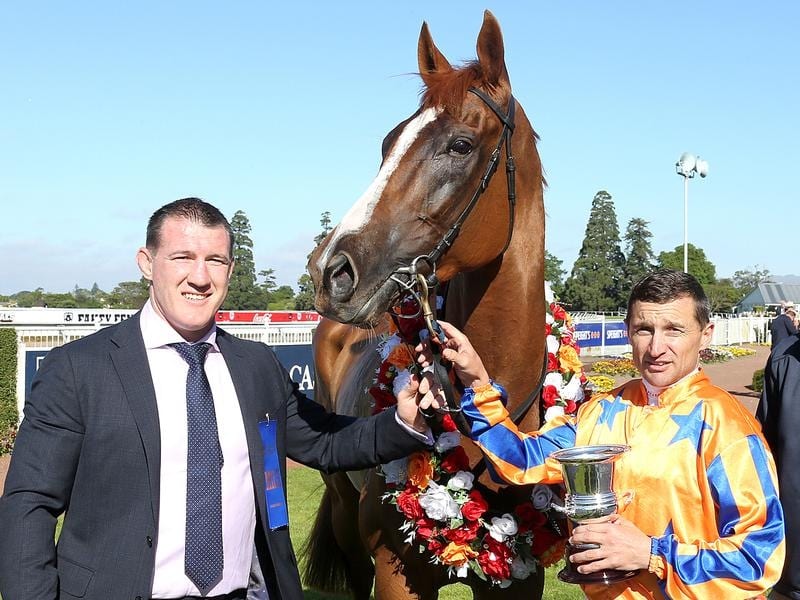 Epsom Handicap favourite Te Akau Shark has had a gallop between races at Canterbury, with jockey James McDonald and trainer Jamie Richards pleased with his condition.

The New Zealand gelding finished second to Dreamforce in his first Australian start in the Tramway Stakes but still retains favouritism for the Group One Epsom (1600m) on Saturday week.

Richards said four weeks between runs suited Te Akau Shark but he wanted to make sure he was ticking over as he wanted and opted for Wednesday’s race day workout.

“We could have trialled him on Friday at Randwick but this gives us an extra few days,” Richards said.

“It’s nice to get him a gallop on a good track like this and to give him a bit of a day out and James was happy with him.

“It was good exercise for the horse.”

Richards is the trainer for Te Akau Racing, which will also have Probabeel running on October 5 at Randwick in the Group One Flight Stakes and New Zealand champion Melody Belle in the Group One Livamol Classic at home.

Probabeel finished second in a three-way photo finish to Saturday’s Group Two Tea Rose Stakes at Randwick , which was won by Funstar with Libertini third.

The Chris Waller-trained Funstar is the favourite for the Flight Stakes (1600m) ahead of Probabeel.

Libertini will be redirected to the shorter Coolmore Stud Stakes over 1200m at Flemington on November 2.

“She was terrific. It’s a shame she missed out but that’s what happens in this game,” he said.

“She’s been to the beach this week and we will work her on Tuesday and head to the Flight Stakes.