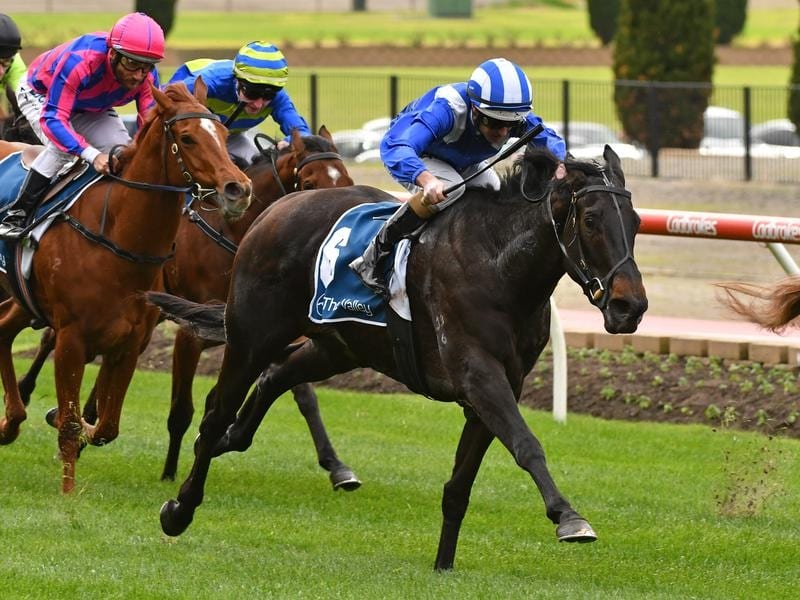 Taraayef will be out to add to her last-start win at The Valley when she returns to the track.

Lindsay Park wants to give promising filly Taraayef as much practice at The Valley as possible ahead of a planned tilt at a stakes race.

A winner at the first meeting of the new racing season earlier this month, Taraayef returns to The Valley on Saturday for the Palentino – Outstanding 1st Crop Yearlings Plate (1200m).

The race will be a lead-in for Taraayef’s assault on the Listed Atlantic Jewel Stakes at The Valley two weeks later.

“We’ve got a lot of nice three-year-olds all gearing up for the spring so it is a bit of a juggling act,” co-trainer Ben Hayes said.

“Keeping them apart is a bit hard, but it’s a good problem to have.”

Hayes said the way Taraayef handled The Valley swayed the stable to keep the filly for races at the track.

“She won impressively but has drawn a bit of an awkward gate this time, however she did get back last time and really hit the line hard,” Hayes said.

“She seems to go pretty well at The Valley and providing she performs well again we’ll head towards the Atlantic Jewel.”

Stablemate Andrassy Avenue will follow a similar path as Taraayef.

A winner at The Valley in February, Andrassy Avenue went on to finish ninth behind Lyre in Melbourne’s premier two-year-old race, the Blue Diamond Stakes at Caulfield.

“She has come on a lot in her fitness and and I’m expecting a better run,” Hayes said.

“She’s going to enjoy the step up in trip as well as she found the 1000 metres a bit short.”