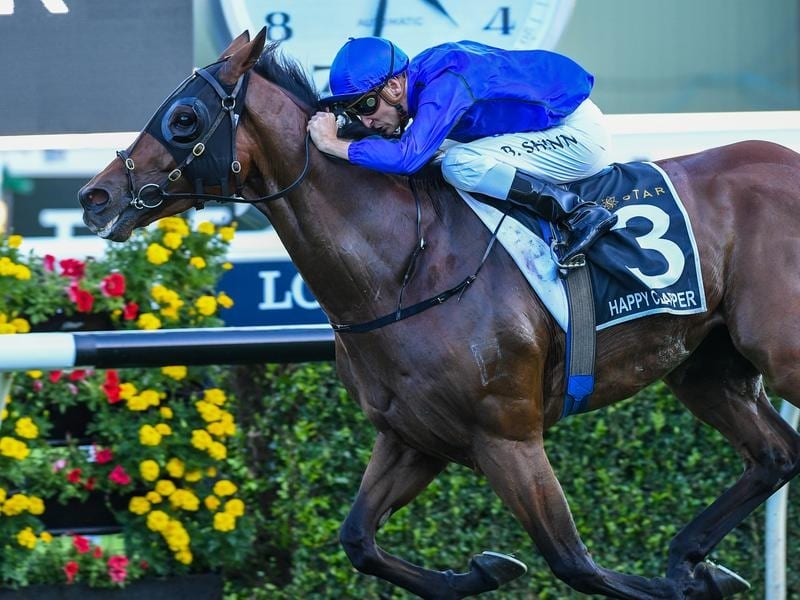 Happy Clapper runs in the Winx Stakes as he begins his laetst campaign as a nine-year-old.

For the first time in four years, Winx will not be at Randwick for the traditional start to the Sydney spring carnival.

What was formerly the Group Two Warwick Stakes is now named for the champion, who won it three times, and kicks off Group One racing for the season.

Few will feel her absence more acutely than trainer Pat Webster who has watched his stable star Happy Clapper finish in the slipstream of Winx 11 times over the past three-and-a-half years and does not know how the racing landscape will look without the superstar.

He fears Happy Clapper won’t either.

“I wish she would have retired two years ago, we would have had another three or four Group Ones.”

Jokes aside, Webster admits to a few nerves over the return of Happy Clapper who fittingly resumes in the Winx Stakes (1400m) at Randwick on Saturday.

He recognises the nine-year-old is nudging ever closer to the end of his career and is vigilantly searching for signs the horse has had enough.

He thought he might have found one when Happy Clapper trialled below expectations recently, but with the benefit of hindsight figured the gelding was probably just wily enough to recognise it wasn’t race day.

“In my mind there’s probably a cloud there with him being nine, but to be honest, he looks as good as he’s ever looked at this stage of his prep and at this time of the year,” Webster said.

“As a matter of fact, he looks better. Even Hugh Bowman said at the trials, ‘mate, how good does he look’.

“Look at old Hartnell, that gives you hope. He ran a terrific race the other day against the Tasmanian mare (Mystic Journey) and he’s nine.”

Happy Clapper will have blinkers back on in the Winx Stakes, replacing winkers.

He will need to be on his game with the race attracting a star-studded field, among them Godolphin gun Avilius and a quartet of trainer Chris Waller’s elite including Australian Oaks winner Verry Elleegant.

Just as Happy Clapper is closer to the end of his career than the beginning, the same is also true of his trainer.

Webster, whose autobiography ‘Don’t Die Wondering’ will be published in November, is an elder statesman of the sport and one of racing’s best-loved characters.

But while Happy Clapper is still going strong, retirement is not on his trainer’s mind.

“I live for the day, not tomorrow so I don’t make those decisions, I just see what happens,” he said.

“But I’m not buying any green bananas or long-play records either.

“After you’ve had a horse like Clapper, it’s hard to come back down but who knows? We’ve only got five or six (horses) but there might be another Clapper there.”