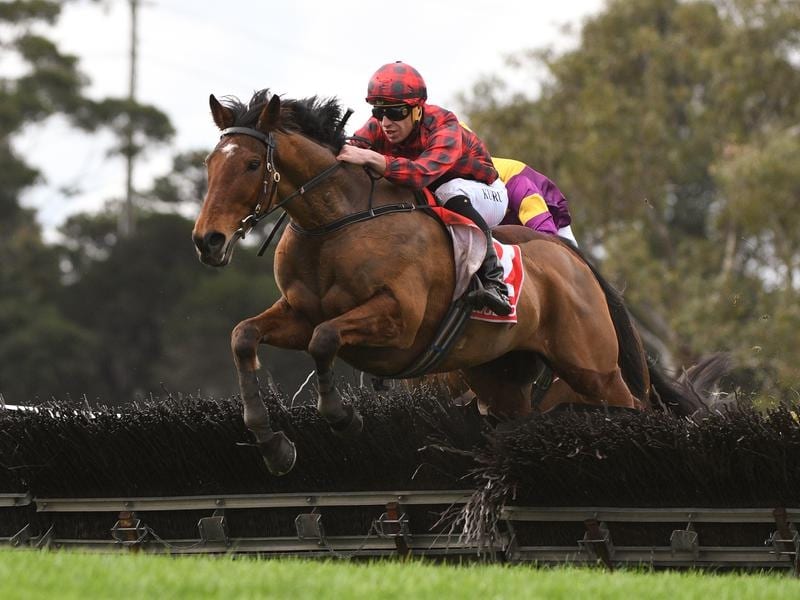 Patrick Payne is fast becoming a master trainer of jumpers.

But while he will go into the record books as the winning trainer of Tallyho Twinkletoe in Sunday’s Grand National Hurdle at Sandown, Payne prefers to deflect all the credit to New Zealand conditioner Kevin “Dummy” Myers.

This season has Payne has collected feature jumps victories at the Oakbank and Warrnambool carnivals along with the Australian Steeplechase at Sandown and the Kevin Lafferty Hurdle at Warrnambool.

Myers was instrumental in sending Zed Em to Payne to win the Grand Annual Steeplechase at Warrnambool and thought Tallyho Twinkletoe the ideal type to contest the Grand Nationals in Australia.

While Payne previously had time to get to know other jumpers Myers sent him, Tallyho Twinkletoe has been in Australia less than four days.

In between arriving in Melbourne and racing at Sandown on Sunday, Tallyho Twinkletoe had to show his ability over jumps in front of Racing Victoria stewards.

“He only arrived at my place at 11pm on Wednesday night and he was at Ballarat the following morning at seven o’clock to qualify,” Payne said.

“So I’m only the fake trainer.

“All thanks to the “Dummy” Myers team back in New Zealand and a special thanks to Jo Rathbone who is close to this horse.

“She has spent a lot of time with him at the beach.”

Backed into $3 favouritism, Tallyho Twinkletoe raced to a 4-3/4 length victory from Firefree ($20) with Euroman ($6.50) a length away third.

Payne thought Myers gave a strong lead to Tallyho Twinkletoe’s ability when he phoned to say he was sending the jumper for both Sunday’s race and the Grand National Steeplechase at Ballarat on August 25.

“Sometimes IRT (International Racehorse Transport) ring up and say there’s a horse of “Dummy” Myers waiting to be picked up,” Payne said.

“Other times he’ll ring up and say I’ve got this thing coming over on this day, but he named this horse and said he was coming over for the two Nationals.

“That was probably a pretty good barometer for this race, but I must admit I’m a little bit surprised as I thought he jumped the steeples better the other day than the hurdles and I thought he’d be better for next time.

“He’s proven me wrong which he’s allowed to do.”

Aaron Kuru picked up the ride after Mathew Gillies was involved in a race fall in New Zealand on Saturday and was stood down on medical grounds.