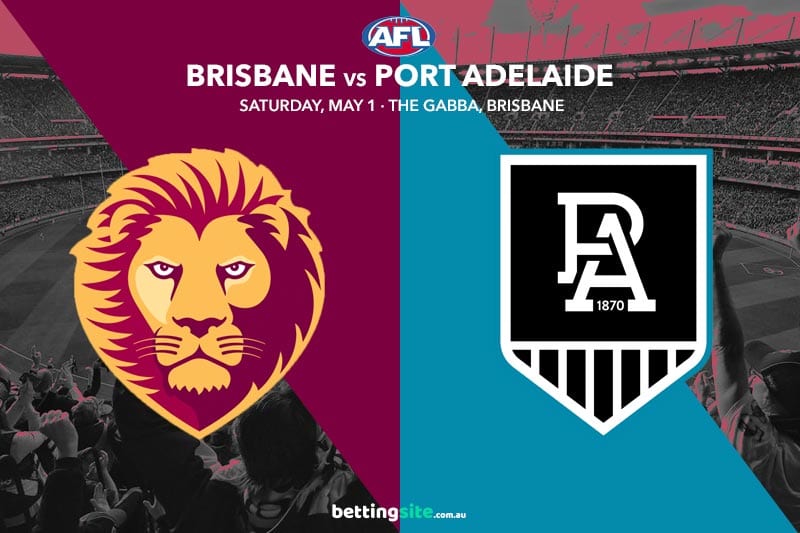 The Port Adelaide Power head up to the Gabba in round seven of the 2021 AFL season to take on the Brisbane Lions in a Saturday night blockbuster.

The Lions will be without Lachie Neale for the next few months, as the champion midfielder underwent ankle surgery after last week’s victory over Carlton.

Ken Hinkley’s Power are going for their fourth consecutive win, but it will not be an easy contest against the in-form Lions.

Chris Fagan’s men have won their last two matches and scored over 100 points in both encounters, so we can expect a hot contest at the Gabba between these two premiership contenders.

The Lions have bested the Power in their last three meetings by an average winning margin of 34 points, but Port Adelaide will still start as slim favourites for this week’s contest. The Power have not beaten the Lions at the Gabba since 2017, leading us to believe this match will go down to the wire.

Eric Hipwood will play an instrumental role for the Lions this Saturday. The key forward has kicked 15 goals from his six encounters with Port Adelaide, while he is coming off two consecutive three-goal matches. Hipwood is paying $2.50 at Sportsbet to put through three more goals in this crucial contest.

These two midfielders have been very good this season, but they need to stand up this week in the absence of their teammates. Travis Boak will not play this week as he battles a quad complaint, while Lachie Neale is the big out for Brisbane. Ollie Wines and Dayne Zorko will not match up against each other at every contest, but the two will essentially go head-to-head as their team’s best midfielders.

Port Adelaide to win by 1-24 points

It is hard to tip against the Power in this contest given how clinical they have been in the past month. Ken Hinkley has coached his men to four straight victories following one bad loss to the Eagles, and he should get his fifth win on the bounce this Saturday. We are expecting a nail-biter, so the 1-24 margin is the way to go.

Ollie Wines to get 30+ disposals

Having collected 30 or more disposals in four of six matches, Ollie Wines has been Port Adelaide’s best accumulator this season. The former co-captain must stand up in the absence of Travis Boak this week, and given he has already recorded over 35 touches twice this season, we think he is more than capable of hitting 30 against the Lions.

We think it will take a few weeks for Brisbane to overcome the loss of Lachie Neale, which is why we are taking the away side here. Ollie Wines will carry the Power to victory out of the centre in a close contest, with Eric Hipwood shining brightly in an honourable loss for the Lions.