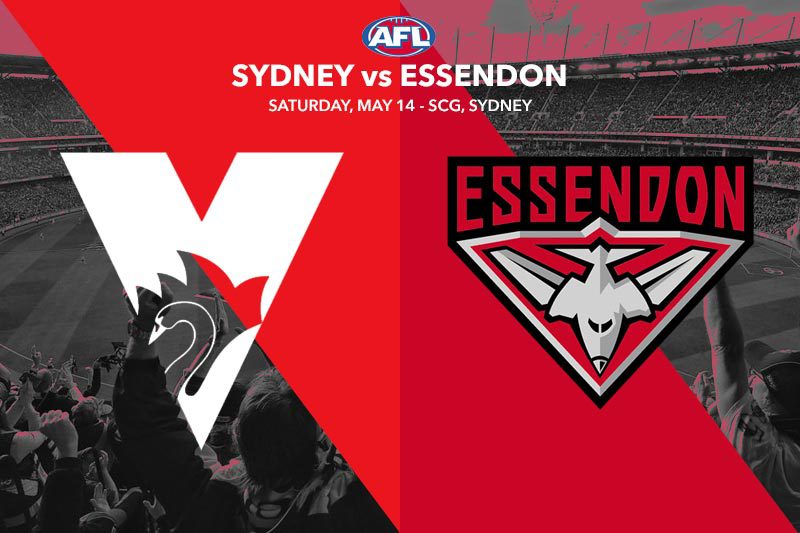 Can the Essendon Bombers get their second consecutive win this Saturday on the road, or will the Sydney Swans be too strong on their home deck at the SCG?

The Swans have been one of the best teams in the AFL this season, but their style has not stacked up in the last fortnight, resulting in consecutive losses against the Lions and Suns.

Ben Rutten’s men made a huge statement in round eight against the Hawks, as they took home the chocolates despite losing five players with illness right before the first bounce.

Experienced stars Dyson Heppell and Darcy Parish led the way for the Bombers last week and guided them to an inspiring win, but can they reproduce that effort this Saturday against the Swans?

Jordan Ridley is an almost-certain starter this weekend after he was withdrawn due to illness in round eight, while a handful of others may also join him to strengthen the Dons.

Tom Hickey played in the VFL for the Swans last week and is ready to make his return to the seniors, which may change the role of the newly acquired Peter Ladhams.

Keep your eyes on the two sharpshooting key forwards at either end of the ground this week, as Lance Franklin and Peter Wright may put on a show in front of the big sticks. Wright has been a phenomenal pickup for the Dons since moving across from the Suns, as he continues to win games off his own boot with big bags of goals. Franklin is an iconic goalkicker and continues to stay consistent, and he loves playing the Bombers more than any other team in the competition. Both star forwards could be in for a big night.

The last five matches between the Bombers and Swans have been won by a margin of 10 or fewer points, and we think that trend will continue this week. Coming off an inspiring win over the Hawks, the Dons are going to fight like hell to keep their season alive, while the Swans may be vulnerable after losing two on the trot.

The recent return of Tom Papley is yet to alter the role of Isaac Heeney, but we think that is going to change this week now that Papley is lining up for his third game of the season. Heeney will spend more time in the middle of the ground, facing off against the likes of Zach Merrett and Darcy Parish. Heeney had 25 touches in round one and can easily replicate that effort this Saturday.

Peter Wright will be the star of the show this Saturday at the SCG in another thrilling contest between the Swans and Dons, while Isaac Heeney will get off the chain for the home side.